Skip to main content
CYBER WEEK ENDS SOON! Spot great deals up to 88% off. >
A Queer Thing Happened To America: And what a long, strange trip it's been - eBook
By: Michael Brown
Stock No: WW29792EB 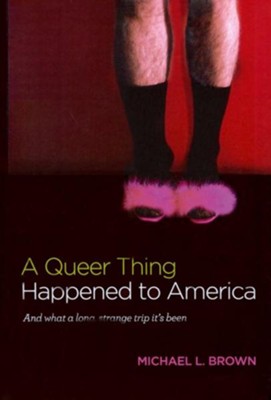 A Queer Thing Happened To America: And what a long, strange trip it's been - eBook

▼▲
A Queer Thing Happened to America chronicles the dramatic cultural changes that have taken place in our country in relation to homosexuality and pointedly asks the question: Are we heading in the right direction? Written in a lively and compelling style and at the same time backed with massive research, this forthright and yet compassionate study evaluates the extraordinary impact gay activism has had on our society, from elementary schools to college campuses, from the press to the courts, and from the world of business to the world of religion.

Forty years ago, most Americans said they didn't know anyone who was gay or lesbian and claimed to know little or nothing about homosexuality. Today, there's hardly a sitcom without a prominent gay character, gay-themed movies have won Oscars, the media celebrates the marriages of same-sex celebrities, elementary school textbooks indoctrinate children with gay, lesbian, bisexual, and transgender ideology, many churches and synagogues now ordain gay clergy - and one of our elected officials is a man with cleavage who often wears a dress and high heels to work. In the courts, religious rights are consistently losing the battle to gay rights, while university students have been expelled from their programs for refusing to endorse homosexual practice.

We have come to a point in our history in which it is common for the mainstream media to portray someone as intolerant and bigoted if they fail to affirm (or even celebrate) homosexuality and transgenderism, and we now find ourselves with little opportunity for constructive, honest dialogue or even the right to put forth a differing opinion. That's why the publishing world was afraid to touch this book, and that's why A Queer Thing Happened to America could be the most controversial book of the decade.

▼▲
I'm the author/artist and I want to review A Queer Thing Happened To America: And what a long, strange trip it's been - eBook.
Back
Back