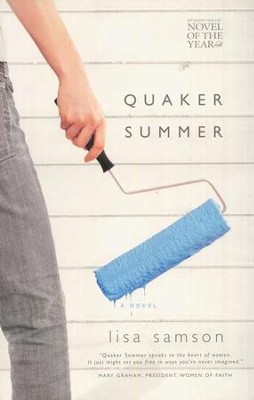 ▼▲
Heather Curridge is envied by most: she has a successful surgeon husband who panders to her every need, a smart son, a beautiful home, and money to shop, re-do her home, and install the newest pool in her back yard. But while Heather is outwardly content, inner turmoil reigns with memories of peers being mistreated in her Christian school and a feeling that she could be doing much more with her life. As Heather slowly starts to come out of her shell, she discovers unlikely friends in two old Quaker sisters and a grumpy nun who help her to discover how she can fulfill her life with God's work. Lisa Samson, softcover, 324 pages.

Sometimes you have to go a little bit crazy to discover the life you were meant to live.

Heather Curridge is coming unhinged. And people are starting to notice. What's wrong with a woman who has everything--a mansion on a lake, a loving son, a heart-surgeon husband--yet still feels miserable inside?

When Heather spends the summer with two ancient Quaker sisters and a crusty nun running a downtown homeless shelter, she finds herself at a crossroads. Life turns upside down for Heather in a Quaker Summer.

“One of the most powerful voices in Christian fiction, Samson delivers …a staggering examination of the Christian conscience.”

▼▲
Quaker Summer is a fictional depiction of the crisis many women go through when they are not sure of who, what, why, and where they are, or when they will be. Summer seems to bring the renewal of feelings that have been suppressed for a very long time.
The author divides the book into three sections to show her main character's unfolding life--"Fool on the Hill," "The Long and Winding Road," and "I'll Follow the Sun." She has taken Heather Reeves Curridge from her fundraising, private school volunteer days, through a couple of situations that bring her around to questioning why things and prestige mean so much to her; that is, after her cardiologist husband, Jace, points out her spending habits and the fact that he works long days to stretch the budget for them and their son Will, who, unlike his mother, is more aware of who he is and what he is about.
The characters introduced are plausible and their descriptions are played out fairly well throughout the book. Gary and Mary Andrews are mentioned more strongly in the beginning and the ending, and Heather's dilemma seems to be centered on them, because of the way her son has been treated by a bully at school. In fact, too much emphasis is placed on her childhood taunting of these siblings, and this reader is left wondering why one scene is even brought into the story.
Heather meets Laney as an eighth grade room mother at St. Matthews' School, and Laney's stepdaughter Nicola becomes a special friend to Will, as in "he really likes her." Carmen is head of the room mother volunteers, and she is most bridled by the need to be a perfectionist and in control, seemingly a necessary person and a friend to no one in particular. Leslie is a widow whose husband was a wealthy philanthropist, and her daughter Lark is a good listener for Heather and one who does not dwell on the unpleasant and goes to work to make things happen.
Anna and Liza, sisters who play a major role in Heather's awakening and soul-searching, come into her life by accident. They are Quakers (Society of Friends members) who take care of Heather after her car swerves to miss a kangaroo, in Maryland of all places. As a result of the care and hospitality of these 92 and 90 year old women, Heather returns there for a two- week respite at the suggestion of her husband. This scenario is a bit awkward to comprehend, since the ages of the sisters defy the many activities and actions with which they are attributed.
Heather, then Jace, is drawn back to the downtown Hotel (to which the reader is introduced in the beginning), where it and the people who live there play another role in the main character's finding herself. A widowed neighbor named Jolly is on the scene and is not developed as well as he could have been, since one is not sure where he is at the end. Perhaps it is a depiction of the harried life we lead and how we forget our neighbors. It seems that this author is anxious to condense the ending to make it work, but still adds another scene that needs more explanation of characters, even though they have been there right along and are in the midst of the crisis.
Women who are in an emotional upheaval because of their "ministries" in life and the roles they have as daughters, wives, mothers and grandmothers will find this tome introspective, but not therapeutic. I did find that Micah 6:8, stated outside the text, was mentioned a couple times for the characters' processing. There are a couple of questionable, provocative sentences and a vulgarity expressed with which I do not agree, along with the introduction of alcoholic beverages for the characters' liking, including the Quaker sisters.
This is not a book that I would choose wholeheartedly just for pleasure. I found that understanding which character was speaking took a look back at times.  Sharon I. Rideout, Christian Book Previews.com

▼▲
One of the most powerful voices in Christian fiction, Samson delivers what seems, on the surface, to be just another Christian women's novel, but in reality is a staggering examination of the Christian conscience. Like most Samson heroines, Heather Curridge is a woman in crisis. Outwardly, her life seems idyllic: she has an unusually handsome, successful and loving husband, a child she adores and the most beautiful home she could imagine. Inwardly, however, she is falling apart, overcome by the idea that this comfortable, affluent life is keeping her from God's will. With the help of several older, wiser Christians, her patient family and her two best friends, Heather comes to some painful conclusions about her past and future. Samson's unflinching exploration of childhood bullying, as well as inner-city poverty and drug culture, are rivaled only by her portrayal of the soul-desiccating acquisitiveness in which many Christians engage, often in a misguided attempt to numb both their heartache and their awareness of God's potentially life-upending plans. Unlike many Christian novelists, Samson does not tidily resolve every single problem her heroine faces, but instead paints an emotionally and spiritually luminous portrait of a soul beckoned by God. Copyright 2007 Publishers Weekly.

▼▲
“Quaker Summer speaks to the heart of women. It just might set you free in ways you’ve never imagined.” -- Mary Graham, Women of Faith

“[A] staggering examination of the Christian conscience. [Samson] paints an emotionally and spiritually luminous portrait of a soul beckoned by God.” -- Publishers Weekly

▼▲
I'm the author/artist and I want to review Quaker Summer, Women of Faith Series #16.
Back
Back