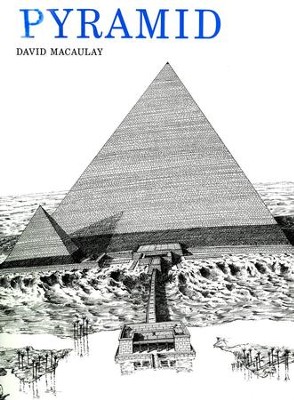 ▼▲
Pyramid is David Macauley's third book, it is an impressive look at what many considered to be among the most awesome of man's creations. Although the pyramids, temples amd tombs in this book are imaginery, they are, however, based closely on several of the pyramids and remnants of temples still standing in Egypt. Even though pyramids failed to protect their burial chambers from robbers they succeeded in making their creators immortal. They stand as a tribute to those who skillfully erected them, leaving behind them, something that would last forever. Recommended for ages 9 and up.

This comprehensive resource on the construction and use of ancient Egyptian pyramids is perfect for young readers looking to expand their knowledge on history, architecture, and ancient Egyptian civilization.

▼▲
David Macaulay is an award-winning author and illustrator whose books have sold millions of copies in the United States alone, and his work has been translated into a dozen languages. Macaulay has garnered numerous awards including the Caldecott Medal and Honor Awards, the Boston Globe–Horn Book Award, the Christopher Award, an American Institute of Architects Medal, and the Washington Post–Children’s Book Guild Nonfiction Award. In 2006, he was the recipient of a MacArthur Fellowship, given “to encourage people of outstanding talent to pursue their own creative, intellectual, and professional inclinations.” Superb design, magnificent illustrations, and clearly presented information distinguish all of his books. David Macaulay lives with his family in Vermont.

▼▲
"David Macaulay's brilliant Pyramid shows, detail by detail, how the great pharaohs' burial places were conceived and constructed . . . His draftsmanship is unexcelled, and his book is pharaonic in opulence and design." Time Magazine

▼▲
I'm the author/artist and I want to review Pyramid, Paperback.
Back
Back