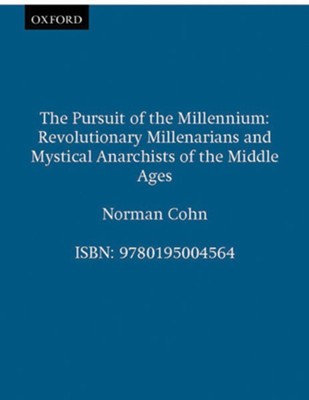 Pursuit of the Millennium

▼▲
(PUBOxford)''As the year 2000 approaches, the crazies will come out of the walls. Read Cohn's definitive description of early apocalyptic movements and the anti-Christ to prepare yourself for new assaults,''---Times Literary Supplement. Millenarianism in the 11th through 16th centuries. 412 pages, softcover.

Norman Cohn held the Astor-Wolfson Chair at the University of Sussex until his retirement in 1980. He is the author of Warrant for Genocide, for which he received the Anisfield Wolf Award in Race Relations.

▼▲
"Cohn uncovers interesting historical connections between millennial ideas and their use in furthering revolutionary movements started by the engine of social unrest."--The Catholic World
"Cohn's book is even more relevant today. He has added a conclusion relating [these movements in medieval Europe] to the contemporary scene....The mirage of a secularized millennium now appeals, he considers, both to the 'disoriented and desperate' in underdeveloped countries, and to an equally disoriented minority on the fringes of the social democratic state."--Times Literary Supplement
"A work of the first water...of great originality and power."--Sir Isaiah Berlin, Twentieth Century
"As valuable as it is interesting...full of historical facts which are passed over in silence in most histories."--Bertrand Russell
"Now we can understand the origins of twentieth century idiologies."--Dr. Wayne Allen, Delta State University

▼▲
I'm the author/artist and I want to review Pursuit of the Millennium.
Back