Skip to main content
Men We Need: God's Purpose for the Manly Man, the Avid Indoorsman, or Any Man Willing to Show Up
By: Brant Hansen
Stock No: WW094521 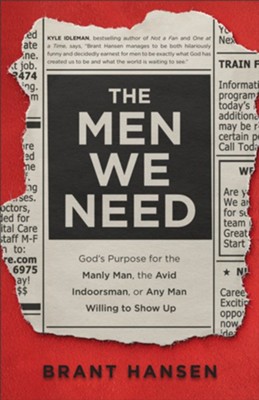 Men We Need: God's Purpose for the Manly Man, the Avid Indoorsman, or Any Man Willing to Show Up

▼▲
Have we misunderstood biblical manhood? What is its true essence? Offering short chapters loaded with practical wisdom, Hansen introduces a fresh vision of who God created men to be---"Keepers of the Garden," protectors and defenders of the vulnerable. His insights are sure to enrich your sense of masculinity no matter what your interests or background. 256 pages, softcover from Baker.

▼▲
The world needs real men, real bad. And there are all sorts of conflicting ideas and messages about what a "real man" is (and is not). Is a real man one who hunts, loves sports, grills meat, fixes cars, and climbs mountains? Sure, sometimes. But that's not really the point of being a man and it's not the purpose for which men were made.

Into our cultural confusion, Brant Hansen paints a refreshingly specific, compelling picture of what men are made to be: "Keepers of the Garden." Protectors and defenders. He calls for men of all interests and backgrounds (including "avid indoorsmen" like himself) to be ambitious about the right things and to see themselves as defenders of the vulnerable, with whatever resources they have.

Using short chapters loaded with must-have wisdom and Brant's signature humor, The Men We Need explains the essence of masculinity in a fresh, thoughtful, and entertaining way that will inspire any man who dares to read it.

▼▲
Brant Hansen is an author, radio host, and advocate for healing children with correctible disabilities through CURE International. He's won multiple awards for "Personality of the Year" for his radio show, which airs on more than 200 stations nationwide. His podcast with his friend and radio producer, The Brant and Sherri Oddcast, has been downloaded more than 10 million times. The author of The Truth about Us, Unoffendable, and Blessed Are the Misfits, Hansen has written for CNN.com, the Washington Post, U.S. News and World Report, the South Florida Sun-Sentinel, Relevant, and numerous other outlets on matters as varied as public policy, culture, sports, Asperger's syndrome, and faith. He and his wife, Carolyn, live in South Florida.

▼▲
I'm the author/artist and I want to review Men We Need: God's Purpose for the Manly Man, the Avid Indoorsman, or Any Man Willing to Show Up.
Back
Back