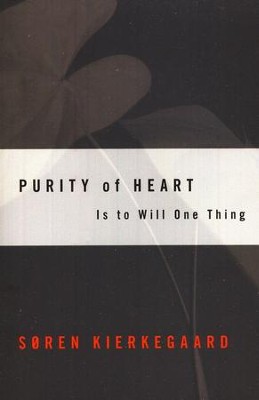 By: Soren Kierkegaard
HarperCollins / 1956 / Paperback
Write a Review
In Stock
Stock No: WW30004

▼▲
The central theme of PURITY OF THE HEART IS TO WILL ONE THING, by Soren Kierkegaard, is the isolation of man, from the flock, from the mass, from the crowd and the heightening of his conciousness as an individual which the eternal accomplishes. Before the quiet gaze of the Eternal, there is no hiding place. As individuals we are what we are before God, and no mass opinion affects this in the least. Kierkegaard believed that his generation was seeking to live in mere time and to make the Eternal superfluous. He reminded them of the Eternal's power to dissolve away time and to separate the crowd into individuals. In memory, in conscience, in remorse, in work at a calling, in solitude, the Eternal still impinges upon the individual and awakens him to a consciousness both of himself and of his responsibility and of his worth to the Eternal.

Crossing the boundaries of philosophy, theology, psychology, and literature, the Danish writer Soren Kierkegaard is regarded as one of the most significant and influential figures in contemporary thought. In Kierkegaard's view, faith is the most essential task of life. Faith is not a matter of dogmatic adherence, but rather of subjective passion. In Purity of Heart, Kierkegaard discusses different aspects of living, particularly the responsibility of single-minded spiritual seeking and ethical integrity, offering clues to the nature of the good while insisting that each reader must work this out for themselves.

Søren Kierkegaard (1813–1855) lived in Copenhagen, Denmark. His books include Works of Love and Spiritual Writings (translated and edited by George Pattison).

▼▲
I'm the author/artist and I want to review Purity of Heart [Soren Kierkegaard].
Back
×
Back
×