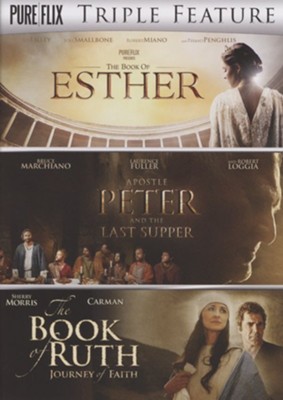 More Images
Out of Stock This product is no longer available and cannot be added to your cart. We apologize for this inconvenience
No longer available.
Stock No: WW406590
Pure Flix Entertainment, LLC / 2014 / DVD

The Book of Esther - A powerful story of courage, faith, and obedience! When Esther becomes King Xerxes's queen, her cousin Mordecai and the despicable Haman engage in a dangerous game of intrigue. It's no secret that Haman plans to exterminate the Jews. Can Esther convince her husband to spare her people---even though she may be putting her own life at risk?

Apostle Peter and the Last Supper - Travel back to first-century Rome and be swept away by a story of triumphant hope! Imprisoned for his faith, the apostle Peter is sentenced to die. But as he recounts his life as a simple fisherman-turned-follower-of-Jesus, he makes an unforgettable impression on his jailers---passing the torch of faith.

The Book of Ruth, the Journey of Faith - This selfless journey of love and devotion is seen through the eyes of a young widow. Choosing to leave her homeland of Moab, she follows her mother-in-law Naomi to Israel after the death of her husband. Upon reaching Bethlehem, she meets and marries a man named Boaz, who is of the Royal House of Judah. This chain of seemingly unrelated events, sets the stage for the future kings of the nation of Israel, and the glorious coming of the Messiah. A Biblical Cinderella story from the archives of the royal Jewish bloodline, this story reveals the redemption of their inheritance through the child Obed, who was the grandfather of King David.

▼▲
I'm the author/artist and I want to review Pureflix Bible Story Triple Feature.
Back
×
Back
×