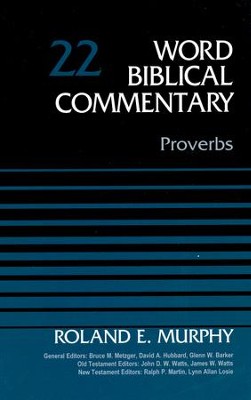 Roland E. Murphy, O. Carm., is George Washington Ivey Emeritus Professor of Biblical Studies of Duke University. His degrees include an S.T.D. in Theology, an M.A. in Semitic Languages from Catholic University of America, and an S.S.L. from Biblical Institute in Rome. He served as co-editor of the New Oxford Annotated Bible. His previous books include commentaries on The Song of Songs in the Hermeneia series and Ecclesiastes in the Word Biblical Commentary series, and The Tree of Life: An Exploration of Biblical Wisdom Literature.

Lynn Allan Losie is Associate Professor of New Testament at Azusa Pacific University. A generalist in New Testament studies, Dr. Losie teaches courses in the Gospels, the Acts of the Apostles, and the Pauline Epistles, as well as in the background areas of Greek, early Judaism, and the greater Hellenistic World. He has published articles on the New Testament and had served as the associate New Testament editor of the Word Biblical Commentary (1997 - 2013). Ordained as a Baptist minister, he has also served in pastoral ministry in Southern California and Oregon.

▼▲
I'm the author/artist and I want to review Proverbs: Word Biblical Commentary, Volume 22 [WBC].
Back
Back