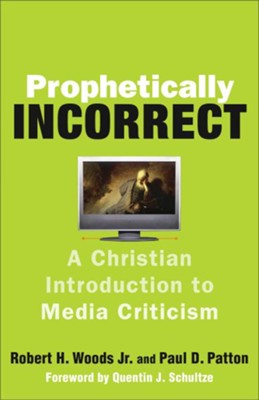 ▼▲
In a media-saturated age when many claim to speak for God, this book shows how to evaluate prophetic speech and communicate faithfully.

▼▲
Robert H. Woods Jr. (PhD, JD, Regent University) and Paul D. Patton (PhD, Regent University) are both associate professors of communication at Spring Arbor University in Spring Arbor, Michigan. Woods is the coauthor of a widely adopted communications textbook, Media Ethics: Cases and Moral Reasoning, and is the coeditor (with Quentin Schultze) of Understanding Evangelical Media. Patton is a contributing author to Understanding Evangelical Media and is an accomplished playwright, actor, and director.

▼▲
"Woods and Patton take on a big theme, probe deeply and carefully, and require attentiveness from the reader. In the end the reader is summoned to engage, think, and decide. The authors are aware of the totalizing impact of the media in our culture, and offer a self-aware, prophetic critique of that pretense. They move easily between popular culture and prophetic tradition, doing so in a puckish, knowing manner that engages and delights. For the knowing reader, this prophetic foray echoes and replicates Jeremiah's savage truthfulness against the temple of his day; only now the temple exists in the liturgies of sitcoms, professional sports, advocacy news, and infomercials. The hunger for truth voiced here is an urgent one."
--Walter Brueggemann
Professor Emeritus of Old Testament,
Columbia Theological Seminary

"Prophetically Incorrect presents the radical possibility that a moral accounting is and always has been inescapably human. Social health and personal wellbeing keep it at the very center of entertainment, storytelling, and education. In turn, Woods and Patton offer a powerfully consistent argument that leads readers to ask--whether about U2 or Lady Gaga--what's the moral point? The authors' 'prophetic' angle is that moral claims are different from common first impressions or gut hunches. Clear-headed and intellectually competent, these authors want seats at the Cynics' Cafe, the Debate of the Disenchanted, and the Church Council--all of which will be challenged by their presence."
--Mark Fackler,
Professor of Communications,
Calvin College

"A characteristic fault of prophets is that they are so damn clear, and I use that theologically explosive word intentionally, for prophets speak uneasy truth to a complacent world slipping into damnation. Authors Robert H. Woods and Paul D. Patton have crafted a cogent argument for the prophetic imagination. Part cultural critique and part classical devotional, Prophetically Incorrect strikes with keen and accurate insight and disturbs our tiny universes." --Terry Lindvall,
C. S. Lewis Chair of Communication and Christian Thought,
Virginia Wesleyan College

"As consumers and critics of the media, we must develop a prophetic voice, say Robert Woods and Paul Patton. This isn't a book for those who are given to knee-jerk reactions or bumper-sticker slogans. But for Christians willing to be courageously reflective, Prophetically Incorrect is a gem."
--Em Griffin,
Professor Emeritus of Communication,
Wheaton College,
Author, A First Look at Communication Theory

▼▲
I'm the author/artist and I want to review Prophetically Incorrect: A Christian Introduction to Media Criticism - eBook.
Back
×
Back
×