The Prophet & the Messiah: An Arab Christian's Perspective on Islam and Christianity
By: Chawkat Moucarry 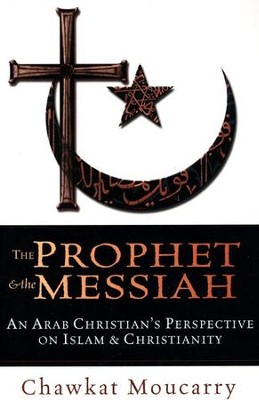 The Prophet & the Messiah: An Arab Christian's Perspective on Islam and Christianity

▼▲
What do Christians believe about the Bible? Muslims about the Qur'an? And what do Christianity and Islam each have to say about Jesus and Muhammad? Moucarry describes and compares the central doctrines of each religion, explaining key beliefs and debunking common misconceptions---providing grist for an informed and respectful dialogue. 337 pages, softcover from InterVarsity.

▼▲
In an age of media distortion and widespread stereotypes, Christians and Muslims need a greater understanding of each other's faith. What do Christians believe about the Bible? What do Muslims believe about the Qur'an? And what do both Christianity and Islam have to say about Jesus and Muhammad? In this evenhanded and conciliatory book Chawkat Moucarry calls Christians and Muslims to engage in genuine dialogue, urging them to relate to each other with true humility and respect. In a straightforward fashion he describes and compares the central doctrines of Christianity and Islam, explaining key beliefs and debunking common misconceptions. Christians who read this book will learn much about Islam. Likewise, Muslims who read it will discover why Christians are convinced of the truth of Christianity. Sure to provide grist for informed discussions, this rare book is one that both Muslims and Christians can fruitfully study together.

▼▲
Moucarry was born in Syria and has lived in both Muslim and Christian communities. He earned his doctorate in Islamic studies from the University of Sorbonne (Paris) and is now a tutor and lecturer in Islamic studies at All Nations Christian College in England. Moucarry is also the author of

▼▲
I'm the author/artist and I want to review The Prophet & the Messiah: An Arab Christian's Perspective on Islam and Christianity.
Back
×
Back
×