Skip to main content
Prophecy in the Early Church and the Ancient Mediterranean World
By: David Aune
Stock No: WW0635 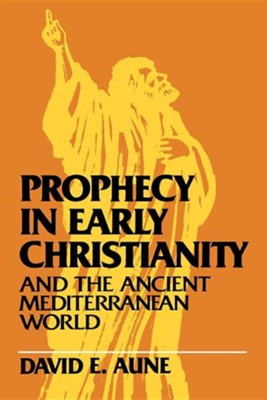 Prophecy in the Early Church and the Ancient Mediterranean World

▼▲
This study is written from the perspective that early Christianity must be understood within the setting of the ancient Mediterranean world, without unduly emphasizing the Israelite-Jewish heritage of early Christians nor neglecting the dominant Greco-Roman culture within which both Judaism and early Christianity grew and changed. Its purpose is not only to present a reconstruction of the phenomenon of early Christian prophecy, but also to suggest new frameworks within which to understand the subject better. This is the most comprehensive and detailed study of the topic yet to appear. Earlier writers have been content to set New Testament prophecy in continuity with its Old Testament counterpart. Aune carves a fresh niche for his investigation by acquain ting the reader with prophecy in Greco-Roman culture as a milieu that cannot be ignored.

Comparable in scope to Johannes Lindblom's Prophecy in Ancient Israel, this book offers the first comprehensive treatment in English of the place of prophecy in the New Testament period.

Because early Christianity was the product of western as well as eastern religious and cultural traditions, David Aune begins by examining the antecedents of early Christian prophecy. He describes Greco-Roman prophecy — the types of oracles, the people who prophesied, the procedures, and the purpose of prophecy. In examining Israelite-Jewish prophecy, Aune discusses the Old Testament prophets, first-century apocalyptic literature, eschatological prophecy, John the Baptist, and Qumran.

Aune attributes the eventual decline of prophecy to the institutionalization of Christianity, in which the functions of teachers, pastors, elders, and deacons replaced the essentially similar functions of prophets.

▼▲
Birger Gerhardsson
—Lund University, Sweden
"This full-scale investigation brings research a good step forward. . . . The presentation is concise and rich, and the author's fine distinctions and his ability to formulate pertinent questions create an indispensable basis for further discussions."

Robert M. Grant
—University of Chicago
"This very important study of early Christian life will enlighten anyone who reads it. It is a major contribution to the whole early Christian world, based on sound learning and written to be read."

I. Howard Marshall
"Professor Aune has written the most comprehensive and detailed study of early Christian prophecy yet to appear. He puts his encyclopedic knowledge of ancient Judaism and the Greco-Roman world to excellent account in placing Christian prophecy within its context. . . . This book is a major contribution to New Testament scholarship and will become the standard textbook on its subject."

G. R. Beasley-Murray
"David Aune's study of early Christian prophecy is an extraordinary achievement. . . . The wide-ranging scope of this work and constructive critical evaluation make it a notable contribution to New Testament scholarship."

F. F. Bruce
"Dr. Aune has given us a more thorough and comprehensive study of early Christian prophecy in its setting than anything that I have seen thus far."

Ralph P. Martin
"Dr. Aune breaks new ground and challenges some well-accepted positions. Earlier writers have been content to set New Testament prophecy in continuity with its Old Testament counterpart. Aune carves a fresh niche for his investigation by acquainting the reader with prophecy in Greco-Roman culture as a milieu that cannot be ignored. . . . His classification of the 'types' of early prophetic oracles is bound to provoke discussion by setting this study on the basis of firm, objective criteria. The result is a most significant, exciting, well-constructed — and eminently readable — book."

▼▲
I'm the author/artist and I want to review Prophecy in the Early Church and the Ancient Mediterranean World.
Back