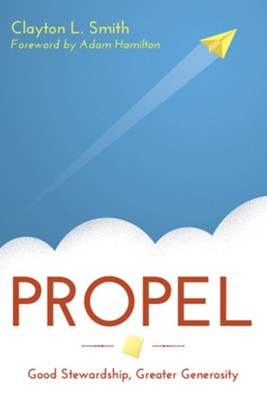 ▼▲
Creating a culture of generosity beyond tithing

Pastors and other church leaders often feel ill-equipped in the critical area of stewardship and giving. Propel: Good Stewardship, Greater Generosity fills that need by offering a comprehensive course in church stewardship for the pastor, stewardship leader, or seminarian. Author Clayton Smith gives clear instructions for the organization and implementation of annual campaigns, planned giving programs, memorial gifts, and much more. He offers an extraordinary depth and breadth of practical information along with the wisdom that comes with decades of real church leadership experience.

▼▲
Clayton L. Smith, now retired, served as the Executive Pastor of Stewardship and Generosity at Church of the Resurrection in Leawood, Kansas. He served as a Senior Pastor in the United Methodist Church for more than 25 years and an Ordained Elder for more than 40 years. He and his wife, Lori, live in Stilwell, Kansas. Adam Hamilton is senior pastor of The United Methodist Church of the Resurrection in Leawood, Kansas, one of the fastest growing, most highly visible churches in the country. The Church Report named Hamilton’s congregation the most influential mainline church in America, and he preached at the National Prayer Service as part of the presidential inauguration festivities in 2013. Hamilton is the best-selling and award-winning author of The Walk, Simon Peter, Creed, Half Truths, The Call, The Journey, The Way, 24 Hours That Changed the World, John, Revival, Not a Silent Night, Enough, When Christians Get It Wrong, and Seeing Gray in a World of Black and White, all published by Abingdon Press. Learn more about Adam Hamilton at AdamHamilton.com.

▼▲
I'm the author/artist and I want to review Propel: Good Stewardship, Greater Generosity.
Back
Back