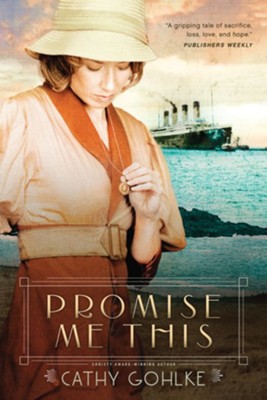 Promise Me This - eBook

▼▲
Michael Dunnagan survived the sinking of the Titanic, thanks to the courage of Owen Allen, and promised to help Owen's family, his younger sister, Annie, in England and the rest of the family living in New Jersey, since Owen could not. Michael started to communicate to Annie through letters, but her anger over her brother's death was steeped in each of her responses. Eventually, Annie begins to lay aside her anger and their letters become friendlier. Michael saves up enough money to bring Annie to America just as WWI breaks out in Europe...then all communication with Annie ceases!

▼▲
In Promise Me This by Cathy Gohlke, fifteen-year-old Michael Dunnagan hardly dares to believe that God might hear the prayers of "a gutter rat" like him until the kindness of a stranger gives him hope. Meanwhile, fourteen-year-old Annie Allen only wants time to pass quickly so that she might join her older brother Owen in America, but tragedy forces her to learn the bitterness of sorrow and the freedom of forgiveness.

Gohlke's historical romance, set during the time of the Titanic and World War I, explores the depth of human nature and emotions through its three-dimensional, compelling characters, Michael and Annie, as well as numerous minor characters. They keep a familiar and sometimes overused setting from becoming a cliche. Placing the sinking Titanic within its historical context just before World War I also helps keep the story fresh.

Promise Me This illustrates the truth shown in John Bunyan's classic work, Pilgrim's Progress: when we drop our burdens at the foot of the cross, we find peace and freedom. Or, as Psalm 55:22 says, "Cast your burden on the LORD, and he will sustain you." Although this is not a book for readers who want heart-pounding action on every page, Promise Me This will certainly satisfy romance readers who enjoy historical details and character-driven plots. Ruth Anne Burrell, www.ChristianBookPreviews.com

▼▲
One afternoon, young Michael Dunnagan steals away from his job to see the Titanic off. Through a sudden turn of events, he meets Owen Allen, a young man off to America to help his uncle in a gardening business. After a series of deceptions, Michael, who is not supposed to be on the ship, boards the Titanic, hoping to follow Owen to America and join him in this new business venture. Owen has left behind his sister, Annie, promising her that he will call for her once he is settled in America. When the Titanic sinks, Owen dies and asks Michael to take care of his sister. Annie and Michael begin a correspondence that at first is friendly, but soon turns romantic. When WWI intervenes, it appears that the two may have lost each other because of various circumstances on both sides of the Atlantic, but love and grace prevail in the end. Two-time Christy Award winner Gohlke tells a gripping tale of sacrifice, loss, love, and hope against the setting of familiar historical events; the loss of the Titanic marks its centennial in 2012. Agent: Natasha Kern. (Feb.) Copyright 2011 Reed Business Information.

▼▲
I'm the author/artist and I want to review Promise Me This - eBook.
Back
Back