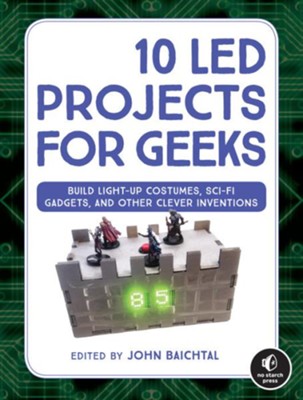 ▼▲
10 LED Projects for Geeks is a collection of interactive and customizable projects that all have the humble LED in common, but don’t write them off as basic! You’ll learn how to make challenging and imaginative gadgets like a magic wand that controls lights using hand gestures, a pen-sized controller for music synthesizers, a light strip that dances to the beat of music, and even an LED sash that flashes scrolling text you send from your phone.

Every project includes photos, step-by-step directions, colorful circuit diagrams, and the complete code to bring the project to life. As you work your way through the book, you’ll pick up adaptable skills that will take your making abilities to the next level. You’ll learn how to:

If you want to experiment with LEDs and circuits, learn some new skills, and make cool things along the way, 10 LED Projects for Geeks is your first step.

▼▲
John Baichtal has written or edited over a dozen books, including the award-winning Cult of Lego (2011 No Starch Press), LEGO hacker bible Make: LEGO and Arduino Projects (2012 Maker Media) with Adam Wolf and Matthew Beckler, as well as Robot Builder (Que 2013), and Hacking Your LEGO Mindstorms EV3 Kit (Que 2015). He’s hard at work on his latest project, a compilation of Minecraft projects for Maker Media. John lives in Minneapolis with his wife and three children.

▼▲
I'm the author/artist and I want to review 10 LED Projects for Geeks: LightUp Costumes, SciFi Gadgets, and Other Clever Inventions.
Back
×