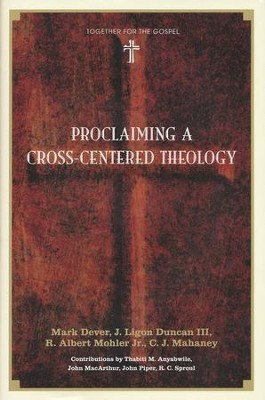 ▼▲
Faithfully preaching biblical theology is not just a necessity, it's vital to your church's existence! In this thought-provoking sequel to Preaching the Cross, leading evangelical pastors reaffirm the importance of proclaiming what Scripture says about God, man, Christ's substitutionary atonement, sacrifice, and repentance. Contributors include John Piper, Ligon Duncan, R.C. Sproul, and Thabiti Anyabwile. 192 pages, hardcover from Crossway.

The four authors, joined by Piper, Sproul, MacArthur, and Anyabwile, powerfully elaborate on the essence of pastoral ministry and the necessity of proclaiming a fully biblical theology.

Mark Dever (PhD, Cambridge University) is the senior pastor of Capitol Hill Baptist Church in Washington, DC, and president of 9Marks (9Marks.org). Dever has authored over a dozen books and speaks at conferences nationwide.

▼▲
I'm the author/artist and I want to review Proclaiming a Cross-Centered Theology.
Back
Back