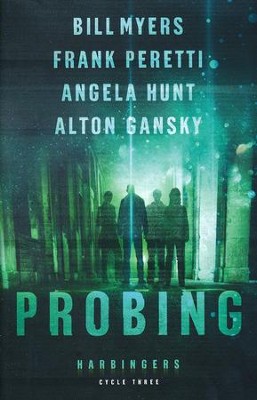 Probing is Cycle Three of the Harbingers series, each following a different character.

BRENDA - The street-hustling tattoo artist who sees images of the future.

THE PROFESSOR - The atheist ex-priest ruled by logic.

TANK - The naïve, big-hearted jock with a surprising connection to a healing power.

DANIEL – The institutionalized ten-year-old who can see into the supernatural world.

The team is flown to Hollywood as honored guests for a taping of the new TV pilot, Live or Die, the Ultimate Reality. When violence and chaos begin, they must stop it before it spreads across the globe.

The Mind Pirates by Frank Peretti

While the team is on vacation, they come across an earring with mysterious powers and two members of the team are kidnapped by 17th-century pirates. They find themselves in the 21st century with involvement in international finance and high-tech piracy.

When the team meets at the home of Andi’s grandparents’ for some rest and relaxation, the arrival and mission of two mysterious black-eyed children and a baby’s disappearance have them on their feet again. Now instead of finding rest, they must find the missing child

The Village by Alton Gansky

The team goes to a Secretive small town of Newland, North Carolina to find the town is trying to literally get rid of them. They must go between universes to solve a problem before the window between worlds closes forever.

Cycle Three of the Harbingers series offers more suspense, more chills, and a deeper look into the battle for light in a growing darkness.

In Myers's "Leviathan," the team heads to Hollywood for a taping of the new TV pilot, Live or Die, the Ultimate Reality. Little do they realize the depths of darkness they are about to enter--a darkness that, unless they stop it, will soon spread across the globe.

Frank Peretti's "The Mind Pirates" offers a rousing story featuring bizarre visions and memories of a murder, a kidnapping by 17th-century pirates, and an earring with mysterious powers. The team must overcome the ruthless scheming of an evil, hidden nemesis.

In "Hybrids" from Angela Hunt, the sight of two children chills the team to their bones. Seeking rest and relaxation, the four friends must instead find answers to the arrival and mission of two mysterious black-eyed children.

In "The Village" from Alton Gansky, a visit to a guarded and secretive small town in North Carolina becomes the most challenging mystery they've ever faced--as they race to solve a problem they barely understand before time runs out.

▼▲
Bill Myers is a bestselling author and award-winning filmmaker, as well as the co-creator of McGee and Me. He lives in California. Learn more at www.billmyers.com.

Frank Peretti is one of American Christianity's best-known authors. His novels, including This Present Darkness, have sold more than 10 million copies. He makes his home in Idaho. Learn more at www.frankperetti.com.

Angela Hunt has sold more than 4 million books worldwide, and her more than 100 works include her Silent Years series and Risen: The Novelization of the Major Motion Picture. She resides in Florida. Learn more at www.angelahuntbooks.com.

Alton Gansky is the author of 24 novels. He has won the Angel Award and received the ACFW award for best suspense/thriller for his work on Fallen Angel. He lives in California. Learn more at www.altongansky.com.

▼▲
I'm the author/artist and I want to review Probing #3.
Back
Back