The Prisoner of Zenda and Rupert of Hentzau - eBook
By: Anthony Hope 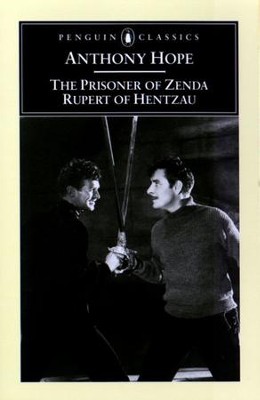 The Prisoner of Zenda and Rupert of Hentzau - eBook

▼▲
A "political fairy tale", the "Prisoner of Zenda" and the included sequel "Rupert of Hentzau" are political satires on late nineteenth century European politics. With humor and adventure, this story of false identities and swordfights will enthrall all. 372 pages, softcover.

▼▲
Best known for his political fairy tale, The Prisoner of Zenda, which saw four major screen adaptations, including the acclaimed 1937 incarnation starring Ronald Colman, Anthony Hope was one of the few novelists to achieve wide popular and critical admiration during his lifetime.

Regarded by many critics as the finest adventure story ever written -- and certainly one of the most popular -- The Prisoner of Zenda (1894) tells the story of Rudolf Rassendyl, a dashing English gentleman who bears an uncanny resemblance to the ruler of the fictional kingdom of Ruritania. Rassendyl masquerades as the king in order to save the country from a treacherous plot and secures the release of the wronged prisoner. In the process he wins the heart of the beautiful princess Flavia, but ultimately surrenders the crown and the hand of his beloved princess to the rightful ruler.

Rupert of Hentzau, which ends in tragedy rather than triumph, is the darker, more problematic sequel to The Prisoner of Zenda. Full of swash-buckling feats of heroism as well as witty irony, these adventure tales are also wonderfully executed satires on late nineteenth-century European politics.

▼▲
Anthony Hope is the pseudonym of Anthony Hope Hawkins, a successful and prolific author of fiction and drama. The son of a school headmaster, Hope was born in London in 1863. While practicing law, Hope also experimented with creative writing, and he published his first novel, a political satire entitled A Man of Mark, at his own expense in 1890. With the publication of his most famous novel, The Prisoner of Zenda, in 1894, Hope abandoned his legal career to write full-time, penning the short story collection, The Heart of Princess Osra (1896), and the Zenda sequel, Rupert of Hentzau (1898). Throughout his productive life, Hope published a wide variety of fiction, in areas ranging from the light domestic comedy of The Dolly Dialogues (1894) to the more serious fiction of Simon Dole (1889). He died on July 8, 1933.

Gary Hoppenstand is a professor in the Department of American Thought and Language at Michigan State University. He has researched and published widely in the areas of popular culture and popular fiction studies, and he edited the Penguin Classics editions of Anthony Hope's The Prisoner of Zenda and Rupert of Hentzau and A.E.W. Mason's The Four Feathers. He is the past president of the Popular Culture Association, and the current editor of the Journal of Popular Culture.

▼▲
I'm the author/artist and I want to review The Prisoner of Zenda and Rupert of Hentzau - eBook.
Back
×
Back
×