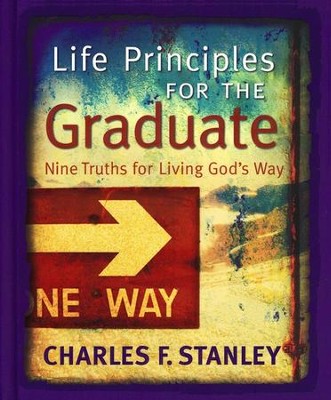 ▼▲
Wise words from Dr. Charles Stanley are featured in an artistic and beautiful gift book for the high school or college grad. Focusing on nine truths for living God's way, Dr. Stanley can be counted on to deliver life-changing insight from the Bible.

Equip our graduates for living in the real world!

Graduates from high school and college move into a newer, higher level of independence, making decisions that will affect them for the rest of their lives. They need wisdom and guidance as they face the challenges that come with living in the world without becoming part of it. Life Principles for the Graduate provides nine biblical truths for living God’s way as opposed to the world’s way, creating greater opportunity to grow stronger in faith while learning to trust and fully believe His Word as truth.

Dr. Charles Stanley is the senior pastor of the First Baptist Church of Atlanta, where he has served for more than 40 years. He is a New York Times bestselling author who has written more than 60 books, including the bestselling devotional Every Day in His Presence. Dr. Stanley is the founder of In Touch Ministries. The In Touch with Dr. Charles Stanley program is transmitted throughout the world on more than 1,200 radio outlets and 130 television stations/networks, and in language projects in more than 50 languages. The award-winning In Touch devotional magazine is printed in four languages with more than 12 million copies each year. Dr. Stanley’s goal is best represented by Acts 20:24: "Life is worth nothing unless I use it for doing the work assigned me by the Lord Jesus—the work of telling others the Good News about God's mighty kindness and love." This is because, as he says, "It is the Word of God and the work of God that changes people’s lives."

Q: Age apprepriate? I am sending two graduation gifts. Is this book appropriate for a Catholic high school grad? For a college grad?

This book is geared for both high school and college grads. Doctrinally, it would be most appropriate for a protestant grad.

▼▲
I'm the author/artist and I want to review Life Principles for the Graduate: Nine Truths for Living God's Way.
Back
×
Back
×