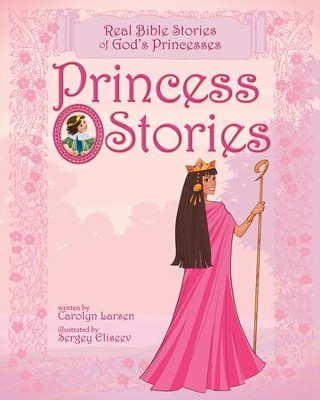 ▼▲
The big sister to My Princess Bible, Princess Stories is a collection of first-person narrative stories about 29 women in the Bible-and the 30th story is about another one of God's princesses, you the reader! In addition to the first-person story about the princess, there is also a rhyming verse about the princess, a Bible verse from another passage of Scripture that summarizes or relates to the character trait, and the Princess Ponderings-questions that help girls and their parents discuss the stories and relate the lessons to real life.

▼▲
Princess Stories is the big sister to popular board book My Princess Bible. Princess Stories, appropriate for girls ages 4 to 8, is a collection of first-person narrative stories about 29 women in the Bible—and the 30th story is about the reader, who is God's princess too.

In each four-page story, the reader gets a rhyming verse about the princess (addressed to “Mirror, mirror on the wall”), a first-person story of the featured Bible woman and the special quality her life reflects, a Bible verse from another passage of Scripture that summarizes/relates to the character trait, and Princess Ponderings—questions that help girls and their parents discuss the stories and relate the lessons to life.

Through this book, girls will learn more in-depth stories of women of the Bible and how to apply Scripture to their own lives.

▼▲
Princess Stories by Carolyn Larsen puts a Christian spin on the Disney craze over princesses. However, instead of Cinderella, Snow White, and Jasmine, the focus here is on Judge Deborah ("The Wise Princess"), Ruth ("The Loyal Princess"), Esther ("The Daring Princess"), the Virgin Mary ("The Obedient Princess") and 26 other women of the Old and New Testaments. Each princess tells her own story, and no punches are pulled. Eve confesses her sin, and Deborah even actually tells the story of Jael pounding a tent stake through the head of Sisera. (Yikes!)

Following each narrative, there is a page called "Princess Ponderings," in which the readers are asked three questions related to the story and also about a Bible verse referenced in the questions. The sections all begin with the chant of "Mirror, Mirror on the wall, who was the most __ princess of all?" The blank is filled in with words such as bravest, most helpful, unforgotten, surprised, or faithful. The artwork by Sergey Eliseev is akin to coloring book figures and the page borders are overrun with flowers, branches, leaves, and blossoms. For young girls who are obsessed with the Disney version of what a princess should be, this book offers an alternate set of stories with genuine biblical lessons.  Dr. Dennis E. Hensley, www.ChristianBookPreviews.com

▼▲
I'm the author/artist and I want to review Princess Stories.
Back
Back