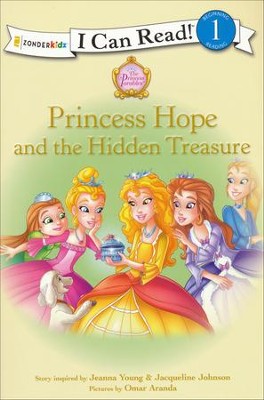 Princess Hope and the Hidden Treasure

▼▲
When Princess Hope and her sisters go shopping one day, they discover their grandmother's lost ring. They want to buy it back, but they do not have enough money. Will the princesses manage to raise enough money to buy their family's missing heirloom? This beginning reader is perfect for children who are starting to read on their own with short sentences, familiar words, and simple concepts.

Based on the Parable of the Hidden Treasure and the Pearl in Matthew 13:44–45, this is the perfect picture book to teach young children what a real treasure is.

In Princess Hope and the Hidden Treasure Princess Hope and her sisters are on a shopping trip in the kingdom. They come across a small box with a ring in it and realize it once belonged to their grandmother. The princesses cannot afford the ring, but Hope plans a "courtyard sale" and it is a success! Once she has sold everything, she is astonished to learn what all she has sacrificed everything for! Through a series of clues that take the princesses through the castle on a treasure hunt, Hope realizes there is more to treasure than just things—including God’s greatest gift of his Son.

Princess Hope and the Hidden Treasure:

Jeanna Stolle Young is a daughter of the king that lives in Southern California with her dashing husband, Bruce, her two sweet princesses, Danika and Emmalynn, and two daring princes, Christian and Kenton. God gave her the vision for this series that has caused her faith to grow through watching Him work. She has a passion for moms of princesses and knights training up the next generation for Christ.  She is a speaker and blogger at www.theprincessparables.com

There are more than 13 books in the Princess Parable brand.

Jacqueline Kinney Johnson is a former tribal missionary to the Kuna Indians located on the Colombian border in Central America. The vision for The Princess Parable Series was born in these jungles. She is the wife of Pastor Ralph Johnson and the mother of two daughters and the grandmother of three princesses, Catherine, Alexandra Grace, and Megan Joy and four young knights, Zack, Payton, Maverick, and Christopher. She delights in stirring young hearts and imaginations with Godly character and the certainty of becoming a child of the King for eternity. Her passion is mentoring and equipping dedicated young women for life, marriage, motherhood, and beyond. She lives in a castle perched high on a hill above the Pacific Ocean in Southern California.


Omar Aranda studied Fine Arts in Buenos Aires, Argentina, where he was born. Many top publishers and companies worldwide have commissioned him for projects including story artwork, comics, and character design. He started his career as an artistic painter but now devotes all of his time to illustrations for children's products.

▼▲
I'm the author/artist and I want to review Princess Hope and the Hidden Treasure.
Back