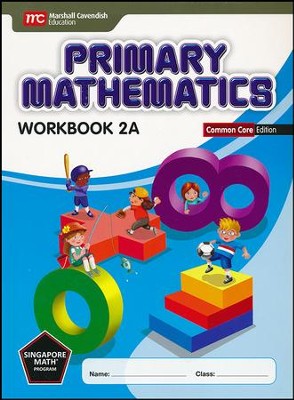 Singapore Math Primary Mathematics: Common Core Edition books have been updated where necessary to align with the CCSS. However, this does not mean that the content has been reduced in its level of difficulty. If CCSS called for content to be introduced at a later level, Singapore Math didn't move content from the earlier level, but rather simply revisits it more in-depth at the CCSS level.

Singapore Math's Primary Mathematics workbooks are consumable and should be used in conjunction with the corresponding textbooks; these Common Core Edition workbooks are not compatible with other Singapore editions. Containing independent student exercises, workbooks provide the practice essential to skill mastery; these workbook sheets correspond to each chapter in the (sold-separately) textbook.

A variety of exercises are presented in the c oncrete>pictorial>abstract approach, including addition and subtraction, multiplication and division, money, fractions, time, and tables and graphs. 200 pages, softcover. Grade 2. Workbook is 2A is designed for the first semester of the Grade 2 year, and follows the 1B curriculum.

▼▲
I'm the author/artist and I want to review Primary Mathematics Workbook 2A Common Core Edition.
Back
Back