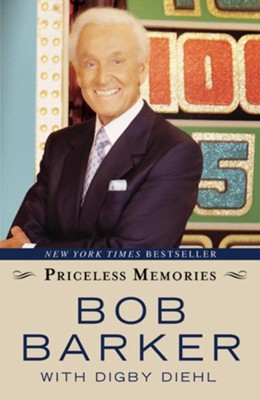 ▼▲
Former host of The Price Is Right, Truth or Consequences, and numerous pageants, Bob Barker has been welcomed into the homes of millions for over 50 years. Now he shares stories of favorite contestants, episodes and celebrities; his childhood on a Native American reservation; being raised by a single mother through the Great Depression; training as a pilot in the Navy during WW II and more.

▼▲
In front of the camera, he has been invited into the homes of millions of Americans as host of The Price Is Right, Truth or Consequences, Miss , Miss Universe, The Rose Parade, and many other programs and specials. Now Bob Barker shares stories of favorite contestants, episodes, celebrity encounters, and behind-the-scenes happenings.
Beyond his public persona, he will open up about his personal life. From being raised on a Native American reservation by a single mother through the Great Depression and the Dust Bowl, to training as a pilot in the Navy during World War II, through his romance with the love of his life and high school sweetheart, Dorothy Jo, and his success at retirement.
His support of animal rights has always been a central part of his life. Bob delves into stories of how he has taken on and the government in his crusade, including his anti-fur stand-off with beauty pageants, his involvement in uncovering animal abuse in movies and television, and the legislation he helped to pass. He also shares personal stories of rescuing animals, from dogs to elephants.
For the innumerable fans who have welcomed Bob into their homes over the last fifty years, this book will be like catching up with a dear and familiar friend who continues to lead a full and endlessly interesting life.

▼▲
"Bob's writing is just like his hosting--smooth and professional." --Alex Trebek, host, Jeopardy

▼▲
After 50 years in television, recently retired game show host Barker (The Price Is Right) recalls peak moments of his long career in this engaging memoir. Born in 1923 of Native American heritage (he is one-eighth Sioux), Barker grew up in South Dakota. When WWII interrupted his college education, he became a naval fighter pilot, but the war ended before he got a seagoing squadron assignment: When the enemy heard that I was headed for the Pacific, they surrendered. In the postwar years, as he made a smooth transition from radio to television, audience participation shows became his specialty, and fame followed after an invitation from Ralph Edwards to host Truth or Consequences. Giving away millions, Barker stayed with The Price Is Right for 6,500 shows: The first time I interviewed an attractive young lady and I realized that her tongue was pierced, I knew that time had passed me by. He also writes at length about how his concern for animal rights created professional career problems, notably in hosting beauty pageants where furs were worn. The team of Barker and Diehl doesn't measure up to Diehl's memorable high-dive collaboration with Esther Williams (The Million Dollar Mermaid). However, there are plenty of backstage anecdotes, so Barker's fans are certain to grab this from bookstore shelves. Two 16-page color photo inserts. (Apr. 6) Copyright 2009 Reed Business Information.

▼▲
I'm the author/artist and I want to review Priceless Memories - eBook.
Back
×
Back
×