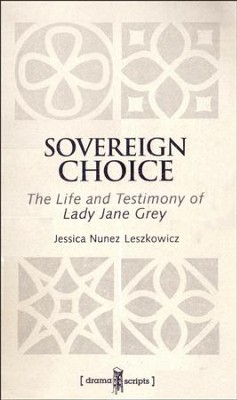 ▼▲
The Life and Testimony of Lady Jane Grey Lady Jane Grey, a well-educated teenager and a devoted Christian, is suprised to learn that she is Edward VI's successor. Jane's cousin, Princess Mary, also claims the throne and wages war against her. The intrigue continues through trials and executions, and Jane is forced to choose between conforming in order to gain her life and freedom and standing alone in her loyalty to Christ, even though it could cost her life. Sovereign Choice was originally produced as a vespers program in Rodeheaver Auditorium on the campus of Bob Jones University in Greenville, South Carolina, on Feb. 7,1999. 11 characters in the play.

▼▲
I'm the author/artist and I want to review BJU Press Drama Script: BJU Press Sovereign Choice: The LIfe and Testimony of Lady Earl Grey.
Back