Skip to main content
Get Christmas Ready Sale: Deals on over 1,150 titles thru 9/27.
Preaching Truth in the Age of Alternative Facts
By: William F. Brosend II
Stock No: WW870241 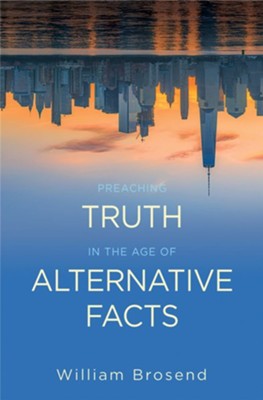 Preaching Truth in the Age of Alternative Facts

There was an age – not long ago – when most Americans held at least a few of the same “truths” as understood, unassailable. Those days are gone. Our new reality is, for many, challenging and disorienting. William Brosend’s Preaching Truth in the Age of Alternative Facts teaches how to preach in a way that allows the church to be its best self: a place of commitment, engagement, acceptance, and compassion for all God’s children.

▼▲
While comedian Stephen Colbert was remarkably prescient some years ago when he introduced the word "truthiness" to our vocabulary, it was presidential advisor Kellyanne Conway who told us that there are "alternative facts" abroad in the land. Rarely has such an offhand comment so captured the imagination while also aptly summarizing the spirit of the age. The late Daniel Patrick Moynihan famously said that while everyone is entitled to his (or her) opinion they are not entitled to their own facts. Until now.

Good preaching has always been a challenge, a combination of exegesis, insight and craft in witness to the Gospel and in service of the Church. Cultural forces, in particular the proliferation of media outlets and the explosion of available entertainment sources, have only made the challenge greater. And that was when most agreed on a common set of facts. Those days are now past and gone, and preachers may be forgiven if at times it feels as if the task is impossible:

Truth in the Age of Alternative Facts offers a way forward. This is a book for preachers, teachers, and other leaders, along with students of preaching. It demonstrates how to proclaim honest, faithful, candid sermons, in spite of social and political disagreements. It teaches how to preach in a way that allows the Church to be its best self—a place of commitment, engagement, acceptance and compassion for all God’s children.

▼▲
William Brosend is Professor of New Testament and Preaching for the School of Theology at The University of the South in Sewanee, Tennessee. An Episcopal priest, he is the author of The Homiletical Question: An Introduction to Liturgical Preaching and The Preaching of Jesus: Gospel Proclamation Then and Now.

▼▲
I'm the author/artist and I want to review Preaching Truth in the Age of Alternative Facts.
Back
Back