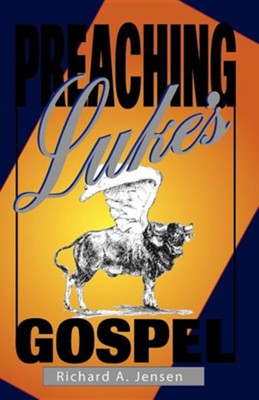 ▼▲
Jensen's research and insights provide a stimulating resource on Luke's Gospel. "Homiletical Directions" at the end of each chapter help readers find a focus and locate themes for preaching the text. Jensen points to the ways in which the biblical writers lock their stories together with other stories in order to give fuller meaning to their narratives. He covers material that is not included in the assigned lectionary texts and discusses the interrelatedness of Luke's stories. These "narrative analogies" imply that preaching on Luke's Gospel may at times be a retelling of two or more Lukean stories.

▼▲
Preachers and Bible teachers will find this book helpful in guiding them to be biblical storytellers. Testimonies to the value of Dr. Richard Jensen's book have been numerous and include the following: Rather than preach about the biblical text one is encouraged and equipped to proclaim the biblical narrative. His book is refreshingly practical and biblical. It stimulates biblical preaching, preparation and proclamation. The preacher is moved from telling a story to telling the story.Pastor Paul GunstenSt. Philip Lutheran ChurchRoanoke, VirginiaI really appreciate the direction each chapter opens for possible preaching emphasis. I thought the first few chapters might just be flukes ... but each succeeding one holds its own. Thanks Pastor William LawsonTrinity Lutheran ChurchGreen Bay, WisconsinThrough a process of narrative analogy Dr. Jensen shows how the stories in the appointed texts of the Revised Common Lectionary relate to the other stories in Luke/Acts. In so doing, he opens up new discoveries for preaching.Richard A. Jensen is well known for his 10 years of preaching for the national radio program Lutheran Vespers. He is currently Dean of the Program for Doctor of Ministry in Preaching sponsored by the Association of Chicago Theological Seminaries and also professor of Homiletics at the Lutheran School of Theology at Chicago. In addition to three years of teaching in Ethiopia, Jensen has served as professor at Dana College, Wartburg Theological Seminary, and Luther/Northwest Seminary. He has served as Producer/Host of two television series, and is the author of eight books and numerous published articles.

▼▲
I'm the author/artist and I want to review Preaching Luke's Gospel.
Back
Back