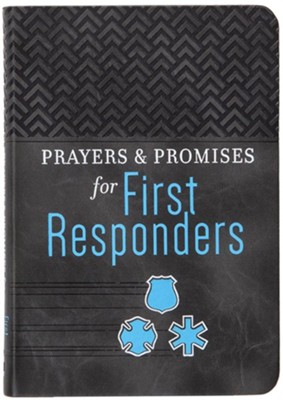 ▼▲
First responders bravely serve the public every day, but their sacrifice doesn't come without a cost. This topical collection of inspirational Bible verses, powerful prayers, and thought-provoking questions will help police officers, firefighters, EMTs, military personnel, and others behind the scenes draw closer to God and find spiritual strength and peace. 160 pages, gray imitation leather from Broadstreet.

First responders across the globe bravely serve the public every day despite the inevitable dangers their professions present, yet their service does not come without cost.

Prayers & Promises for First Responders is the perfect encouraging resource for police officers, firefighters, EMTs, military personnel, and everyone behind the scenes. Arranged by theme, this book contains inspirational Scriptures, powerful prayers, and thought-provoking questions to help readers draw closer to God and find strength and peace.

Trials and hardship are sure to come, but you can stand proudly on the foundation of God’s Word that lasts forever.
For I am the Lord your God who takes hold of your right hand and says to you, Do not fear; I will help you.
Isaiah 41:13 NIV

▼▲
Adam Davis is an author, motivational speaker, and former law enforcement officer. His story reveals the pain that many hide and addresses topics that many avoid. Adam shares his experiences of sexual assault, substance abuse, mental illness, and the struggles and challenges of working in law enforcement. Adam is known for his work on Behind the Badge: 365 Daily Devotions for Law Enforcement, Bulletproof Marriage: A 90-Day Devotional (with Lt. Col. Dave Grossman), and On Spiritual Combat: 30 Missions for Victorious Warfare (with Lt. Col. Dave Grossman). Bulletproof Marriage was a finalist for the 2020 Christian Book Award®.
Adam’s work has been featured in Entrepreneur Magazine, Fox News, The Huffington Post, PoliceOne.com, and Law Enforcement Today. As a speaker, he has presented for the University of Alabama, Auburn University Department of Economic Development, TEDx Troy University, law enforcement agencies, military bases, and many seminars with Lt. Col. Dave Grossman, Taya Kyle,
and other American patriots. His media appearances have included The Rick & Bubba Show, The Blaze Radio Network, Family Life Today, The 700 Club, The Glenn Beck Program, Team Never Quit podcast with Marcus Luttrell, and many others.
Today, Adam continues to dedicate his life to helping others navigate the challenges of marriage and overcoming adversity by continuing to author new, quality resources and speaking across the nation. You can stay up to date with Adam’s events and new releases by visiting www.TheAdamDavis.com. He is proudly supported by his wife of twenty years, Amber, and three children.


In their description of Lt. Col. Dave Grossman (US Army Retired), Slate Magazine said, "Grossman cuts such a heroic, omnicompetent figure, he could have stepped out of a video game." He has five patents to his name and has published four novels, two children’s books, and six nonfiction books to include his "perennial bestseller" On Killing (with over half a million copies sold), and a New York Times bestselling book coauthored with Glenn Beck.
He is a US Army Ranger, a paratrooper, and a former West Point Psychology Professor. He has a Black Belt in Hojutsu, the martial art of the firearm, and has been inducted into the USA Martial Arts Hall of Fame.
Col. Grossman’s research was cited by the President of the United States in a national address, and he has testified before the US Senate, the US Congress, and numerous state legislatures. He has served as an expert witness and consultant in both state and federal courts. He helped train mental health professionals after the Jonesboro school massacre, and he was also involved in counseling or court cases in the aftermath of the Paducah, Springfield, Littleton, and Nickel Mines Amish school
massacres.
Col. Grossman has been called upon to write the entry on "Aggression and Violence" in the Oxford Companion to American Military History and three entries in the Academic Press Encyclopedia of Violence, Peace, and Conflict and has presented papers before the national conventions of the American Medical Association, the American Psychiatric Association, the American Psychological Association, and the American Academy of Pediatrics.
Since his retirement from the US Army in 1998, he has been on the road almost three hundred days a year, for over nineteen years, as one of our nation’s leading trainers for military, law enforcement, mental health providers, and school safety organizations.
Today Col. Grossman is the director of the Killology Research Group (www.killology.com). In the wake of the 9/11 terrorist attacks he has written and spoken extensively on the terrorist threat, with articles published in the Harvard Journal of Law and Civil Policy and many leading law enforcement journals, and he has been inducted as a Life Diplomate by the American Board for Certification in Homeland Security and a Life Member of the American College of Forensic Examiners Institute.

▼▲
I'm the author/artist and I want to review Prayers & Promises for First Responders.
Back
Back