Practices of Power: Revisiting the Principalities and Powers in the Pauline Letters
By: Robert Ewusie Moses 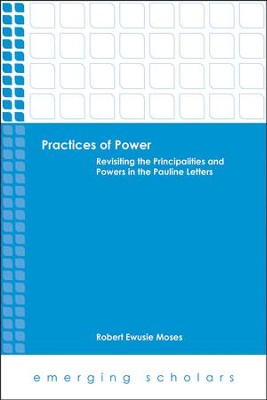 Practices of Power: Revisiting the Principalities and Powers in the Pauline Letters

▼▲
The conception of "powers" and "principalities" in Paul's thought has been amply explored - but how did the powers "work" in the Pauline community?

Robert Ewusie Moses argues that Paul's conception of the powers is best understood through examining the practices he advocates for the early believers. In this detailed study, Moses shows that Paul believed certain practices guarded believers from the dominion of the powers while others exposed humans to the work of powers of darkness. Moses traces the distinct function of "power-practices" in each of Paul's letters and draws illuminating comparisons with traditional African religious practices.

▼▲
I'm the author/artist and I want to review Practices of Power: Revisiting the Principalities and Powers in the Pauline Letters.
Back
×