Skip to main content
Get Christmas Ready Sale — Over 1,000 deals thru 9/26!
Practical Theology for Women: How Knowing God Makes a Difference in Our Daily Lives
By: Wendy Horger Alsup
Stock No: WW502095 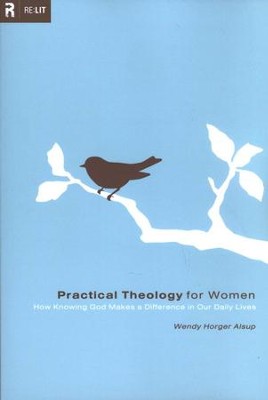 Practical Theology for Women: How Knowing God Makes a Difference in Our Daily Lives

▼▲
This resource presents the power of theology while exhorting women to apply what they believe about God in the middle of life's daily battles.

Women in evangelical churches believe in God. However, when they are faced with life's battles---financial problems, job loss, serious illness---they begin to question the God they know. "Can he really provide for my family?" "Can I truly trust him to get me through this crisis?" If such a woman is not grounded in her knowledge of God, the battles she faces threaten to shatter her wavering faith.

Wendy Horger Alsup recognizes such dangers. In Practical Theology for Women, Alsup uses the power of theology to address practical issues in women's lives. Her book opens with a general discussion of theology and addresses the most fundamental and practical issue of theology: faith. Then she explores the attributes of God the Father, Son, and Spirit from Scripture, concluding with a look at our means of communicating with God---prayer and the Word.

Throughout the book, Alsup exhorts women to apply what they believe about God in their everyday lives. As they do this, their husbands, homes, and churches will benefit.

Alsup exhorts all women to apply what they believe about God in their everyday lives. As they do this, their husbands, homes, and churches will benefit.

Wendy Horger Alsup (MEd, Clemson University) is a math teacher and blogger. She teaches theology to women and is the author of several books.

▼▲
Wendy Alsup takes on several preconceived notions at once in her book , and from several perspectives. You may be thinking, Theology for women? Isnt that an oxymoron? Just peruse the Christian blogosphere to see which gender seems to care more about infralapsarianism, and which cares more about making empty tomb crafts out of Pillsbury biscuit dough and a marshmallow for Easter. The truth is, as Ms. Alsup argues early in her book that many Christians [view] the Bible as two separate tracks  the simple, practical, everyday application stuff for the average Christian, and another, perhaps higher, level of spiritual study reserved for pastors and seminary graduates.

In Part One, Alsup argues clearly and simply that the more time women devote to theology (the study of the nature of God), the richer their spiritual lives will be, and thus their relationships with their families and church community. She shows clearly from both the Old and New Testaments that the very essence of saving faith is to [k]now Him, and then act like you know Him. In Part Two, she then proceeds to outline some of the major attributes of God, along with sections on how we communicate with Him (prayer) and how He communicates with us (Scripture).

One of the major challenges of any work on the nature of God is how to properly list and describe the various aspects of Gods character, both individually and as those aspects work together. Most books make an attempt to create a kind of structure or list from which they can be ordered and studied, so as not to leave any out. Consequently, anyone who has read other works on theology will note that the structure of Part Two seems somewhat haphazard, with some chapters alternately describing an aspect or aspect of Gods identity (e.g. God is our Father) and others describing what God does (The Spirit Sanctifies Us). In some chapters, a single attribute is described in detail, while others outline multiple ones, some with only a paragraph or two. Some critical attributes, such as Gods holiness, justice, and love, are strangely absent, as are common theological concepts such as the Trinity. This is certainly not to suggest that Ms. Alsup doesnt believe that God possesses these qualities, or that they are unimportant! But better editing might have led to a more systematic outline of the various aspects of Gods nature, and to the inclusion of these vital characteristics.

Alsups writing style, on the other hand, is clear and engaging. Each chapter includes many helpful stories from both Scripture and her own life, adding richness to the aspects of Gods character she has chosen to highlight. She confidently and unapologetically takes on unpopular concepts, such as the supremacy of Scripture, and defends them biblically and articulately. There are also helpful book recommendations at the end of each chapter that dig deeper into the various areas Alsup covers.

Overall, the lack of more careful structuring, and a number of unexpected omissions keep Practical Theology for Women from being a truly comprehensive introduction to Biblical theology. Nevertheless, women who want to have their spiritual appetites for the deeper things of God whetted will have much to gain from reading it, and will no doubt be spurred on to read other, deeper works on this topic with more confidence and interest.  Rachael Starke, www.ChristianBookPreviews.com

▼▲
It is my deepest conviction that what God teaches us about himself in his Word is of utmost importance to my personal daily life, explains author Wendy Alsup in Practical Theology for Women. This conviction---of the practical nature and necessity of theology---saturates the pages of this slim but impactful volume designed especially for female readers.

Alsup provides hope and help to women by situating theology, or the study of God, right in the middle of daily life. How does knowing God make a difference when we experience financial problems, serious illnesses, and other difficult circumstances? Alsup makes the study of God accessible by setting aside the daunting vocabulary and complex sentence structure of academic volumes. Practical Theology for Women explores the truth that faith and a right understanding of God form the foundation for the wise daily choices that women desire to make, and it will help women to practice a practical theology.

Alsup writes: Truly, there is nothing like a good grasp of accurate knowledge about God to enable you to meet the practical demands of your life---the practical demands of being a daughter, mother, wife, sister, or friend. So if youve ever thought theology was too deep, too impractical, or too irrelevant for your life as a woman, this book is for you. Let Practical Theology for Women show you the everyday difference that knowing God makes.

▼▲
I'm the author/artist and I want to review Practical Theology for Women: How Knowing God Makes a Difference in Our Daily Lives.
Back
Back