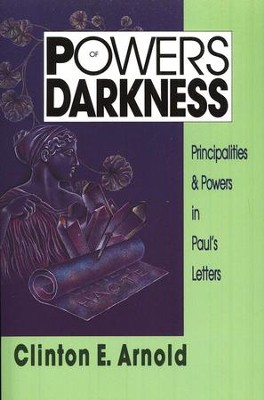 ▼▲
Looking for a biblical theology on demons, principalities and powers, and our battle with them? Clinton Arnold wrote Powers of Darkness as the first step toward a complete biblical theology on spiritual warfare. Arnold sees the danger in the growing influence of the occult and the New Age movement and seeks to help Christians understand the very real problem of Satan and his minions. He focuses on the letters of Paul to see how Paul views the powers and principalities and how we should respond to them.

Though some authors have interpreted principalities and powers as impersonal social, economic and political structures, Arnold argues that the biblical view of principalities and powers is that of organized, powerful and personal beings actively fighting against God and Christianity. As strong as these beings are, Arnold reminds us that Christ has already dealt them a grievous setback in the cross and will totally defeat them when he returns.

Once we have acknowledged the reality of our battle against the principalities and powers, the next question becomes "What can we do?". Arnold offers practical answers to that question, answers that will both inspire and challenge the church to again take up arms in this cosmic struggle against Satan.

▼▲
Satan worship. Witches. New Age channelers. The last two decades have witnessed a vast upsurge in occult activity. Scores of popular books have warned Christians of the dangers and urged them to do battle against these spiritual forces. Few books, however, have developed a careful biblical theology on demons, principalities and powers. Clinton Arnold seeks to fill this gap, providing an in-depth look at Paul's letters and what they teach on the subject. For perspective, he examines first-century Greek, Roman and Jewish beliefs as well as Jesus' teaching about magic, sorcery and divination. Arguing against many recent interpretations that have seen principalities and powers as impersonal social, economic and political structures, Arnold contends that the New Testament view is that such forces are organized, personal beings which Jesus defeated at the cross and will bring into full subjection at his return. In his concluding section Arnold suggests practical ways in which Christians today can contend with the forces of evil. A thoughtful, biblical look at an urgent challenge facing the church.

▼▲
Arnold, author of , earned his Ph.D. at the University of Aberdeen in Scotland, and has done post-doctoral work at Eberhard-Karls-Universität Tübingen in Germany. He is currently associate professor of New Testament at the Talbot School of Theology in La Mirada, California.

▼▲
I'm the author/artist and I want to review Powers of Darkness: Principalities & Powers in Paul's Letters.
Back
Back