Skip to main content
The Wait: A Powerful Practice for Finding the Love of Your Life and the Life You Love, Paperback
By: DeVon Franklin, Meagan Good, Tim Vandehey
Stock No: WW134667 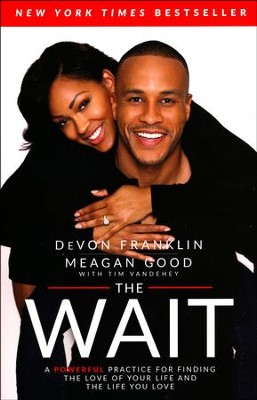 The Wait: A Powerful Practice for Finding the Love of Your Life and the Life You Love, Paperback

Faced with starting a new relationship and wanting to avoid potentially devastating relationship pitfalls Hollywood power couple DeVon Franklin and Meagan Good chose to do something almost unheard of in today’s society - abstain from sex until they were married.

In The Wait, DeVon and Meagan share the life-changing message that waiting - rather than rushing a relationship - can help you find the person you're meant to be with. Filled with candid his-and-hers accounts of the most important moments of their relationship, and practical advice on how waiting for everything - from dating to sex - can transform relationships, allowing you to find a deep connection based on patience, trust, and faith.

▼▲
In this New York Times bestseller, Hollywood power couple DeVon Franklin and Meagan Good candidly share their courtship and marriage, and the key to their success—waiting.

President/CEO of Franklin Entertainment and former Sony Pictures executive DeVon Franklin and award-winning actress Meagan Good have learned firsthand that some people must wait patiently for “the one” to come into their lives. They spent years crossing paths but it wasn’t until they were thrown together while working on the film Jumping the Broom that their storybook romance began.

Faced with starting a new relationship and wanting to avoid potentially devastating pitfalls, DeVon and Meagan chose to do something almost unheard of in today’s society—abstain from sex until they were married.

DeVon and Meagan share the life-changing message that waiting—rather than rushing a relationship—can help you find the person you’re meant to be with. The Wait is filled with candid his-and-hers accounts of the most important moments of their relationship and practical advice on how waiting for everything—from dating to sex—can transform relationships, allowing you to find a deep connection based on patience, trust, and faith.

▼▲
DeVon Franklin is an award&shy;-winning film & TV producer, bestselling author, renowned preacher, and spiritual success coach. DeVon is the ultimate multi-hyphenate. With a commitment to uplifting the masses through entertainment, Franklin has quickly become a force in the media as well as a leading authority on faith, spiritual wellness, and personal development. Beliefnet has called him one of the "Most Influential Christians Under 40," Variety named him one of the "Top 10 Producers to Watch," Ebony has distinguished him as one of the "Top 100 Influential African Americans in America," and even Oprah has called him "a bonafide dynamo...a different kind of spiritual teacher for our times." Franklin serves as President/CEO of Franklin Entertainment, a dynamic multimedia entertainment company with a first-look film deal at 20th Century Fox. As a filmmaker, Franklin is producing the inspirational true story Breakthrough starring Chrissy Metz in theaters Easter of 2020. Additionally, he produced the hit animated film The Star and the hit film Miracles from Heaven. Along with his work as a producer, Franklin is the author of The Truth About Men, as well as The Hollywood Commandments, New York Times bestseller The Wait (cowritten with his wife, award-winning actress Meagan Good), and Produced by Faith. Live Free is his most recent book.

▼▲
"The Wait is an easy read, filled with powerful gems for someone ready to begin living a life free of addictive behaviors that drain away self-awareness." -- EBONY Magazine

"Who we marry is the most important decision we make. The Wait is a must-read for any person considering marriage and seeking to discover the greatness life has to offer! DeVon and Meagan offer a transformative and honest blueprint to unlock your blessings. This book has changed my life...you can't afford to not readThe Wait."

▼▲
I'm the author/artist and I want to review The Wait: A Powerful Practice for Finding the Love of Your Life and the Life You Love, Paperback.
Back
Back