The Wait: A Powerful Practice for Finding the Love of Your Life and the Life You Love, Hardcover
By: Devon Franklin, Meagan Good 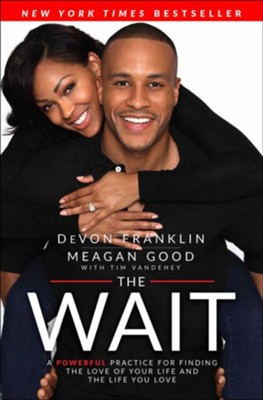 The Wait: A Powerful Practice for Finding the Love of Your Life and the Life You Love, Hardcover

Faced with starting a new relationship and wanting to avoid potentially devastating relationship pitfalls Hollywood power couple DeVon Franklin and Meagan Good chose to do something almost unheard of in today’s society—abstain from sex until they were married.
In The Wait, DeVon and Meagan share the life-changing message that waiting—rather than rushing a relationship—can help you find the person you’re meant to be with. Filled with candid his-and-hers accounts of the most important moments of their relationship, and practical advice on how waiting for everything—from dating to sex—can transform relationships, allowing you to find a deep connection based on patience, trust, and faith.

▼▲
DeVon Franklin is a growing force in entertainment and media. Beliefnet named him one of the "Most Influential Christians Under 40." The bestselling author of Produced By Faithis also President & CEO of Franklin Entertainment, a preacher and motivational speaker. He most recently produced the Sony Pictures film, Miracles From Heaven starring Jennifer Garner. He’s a graduate of the University of Southern California. DeVon and Meagan married in the summer of 2012 and live in Los Angeles. Meagan Good is an award-winning actress and producer. She’s top lined some of Hollywood’s biggest blockbusters including Think Like A Man, Think Like a Man Too, Anchorman: The Legend Continues, Stomp The Yard and the critically acclaimed Eve’s Bayou. She’s also cofounder of The Greater Good Foundation, a non-profit organization that advocates for the empowerment and enrichment of young women.

▼▲
"The Wait is an easy read, filled with powerful gems for someone ready to begin living a life free of addictive behaviors that drain away self-awareness."
"Who we marry is the most important decision we make. The Wait is a must-read for any person considering marriage and seeking to discover the greatness life has to offer! DeVon and Meagan offer a transformative and honest blueprint to unlock your blessings. This book has changed my life...you can't afford to not readThe Wait."

▼▲
I'm the author/artist and I want to review The Wait: A Powerful Practice for Finding the Love of Your Life and the Life You Love, Hardcover.
Back
×
Back
×