Skip to main content
More Power to You: Declarations to Break Free from Shame and Take Back Your Life
By: Margaret Feinberg
Stock No: WW455562 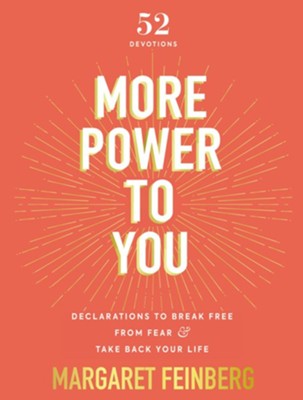 More Power to You: Declarations to Break Free from Shame and Take Back Your Life

▼▲
In More Power to You, popular Bible teacher Margaret Feinberg offers bold declarations of biblical truth to help women overcome old patterns of thinking and welcome the power available to them when they embrace the truth of who God says they are. In 52 readings, Feinberg examines common lies that culture tells us, and replaces it with wisdom from the Bible. Designed for new believers and spiritual veterans alike, More Power to You equips women of all generations to win the battle for their minds and hearts.

Life-changing healing can be yours. And you can make it happen in only 90 seconds a day. Each of the 52 devotions in More Power to You by Bible teacher Margaret Feinberg examines a popular lie in our culture and invites you to replace that lie with a biblical affirmation of truth that will bring joy to your soul.

In a culture that constantly tells us we're not good enough, not beautiful enough, and not doing enough, it's easy to feel as if we have nothing to offer. Lies about who we are and how we are failing slip into our thinking until we believe they are reality. But that's not what God intends for us.

In More Power to You, Margaret Feinberg:

You'll launch into each day by reading the 90-Second Daily Declaration aloud, paying attention to what the Holy Spirit may be highlighting for you. Then you'll read through the weekly devotion, exploring the what and the why behind those biblical truths. These brief but powerful devotions are designed to unleash the true you and remind you of who you really are.

More Power to You equips men and women to:

Try the 90-Second Daily Declaration Challenge and experience the joyous life God wants for you.

▼▲
Margaret Feinberg, one of Americas most beloved Bible teachers, speaks at churches and leading conferences including Catalyst, Thrive, and Women of Joy. Her books, including Wonderstruck, Fight Back With Joy, and Scouting the Divine and their corresponding Bible studies, have sold more than one million copies and received critical acclaim and national media coverage from CNN, Associated Press, USA Today, Los Angeles Times, Washington Post, and more. She was named one of fifty women most shaping culture and the church today by Christianity Today. Margaret savors life with her husband, Leif, a pastor in Park City, Utah, and their superpup, Hershey.

▼▲
I'm the author/artist and I want to review More Power to You: Declarations to Break Free from Shame and Take Back Your Life.
Back
Back