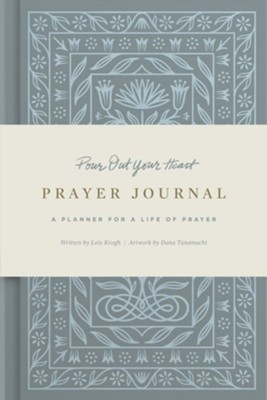 Pour Out Your Heart: A Prayer Journal for a Life of Prayer

The customizable Pour Out Your Heart Prayer Journal includes sample prayers, hymns, sections to record prayers, and more. Designed to use over many years, it guides women toward a joyful, consistent prayer life.

Dana Tanamachi is a lettering artist and designer based in Brooklyn, New York. She has been commissioned by clients such as Google, Target, Nike, Starbucks, USPS, and the Library of Congress. Learn more at tanamachistudio.com.

Lois Krogh has been in mentoring and discipleship ministries for almost four decades as a homeschooling mother of six, grandmother, and wife of a pastor and missionary. She developed a Titus Two mentoring program and currently leads workshops on the practice of a lifetime of prayer. She and her husband, Steve, live in Sharpsburg, Georgia. They are founding members of Christ Church of South Metro Atlanta, where Steve is an elder.

▼▲
I'm the author/artist and I want to review Pour Out Your Heart: A Prayer Journal for a Life of Prayer.
Back