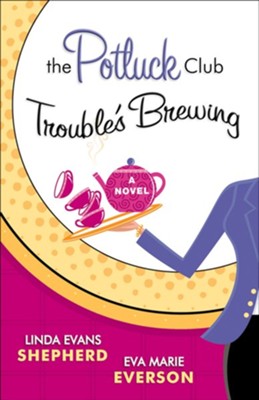 ▼▲
In the second book of the Potluck Club series, The Potluck ladies are back with more adventures and more food to share. Once again each character has her own back story that takes special meaning in her life: Evie is trying to get attention of her sheriff boyfriend and somehow becomes engaged to another man; Goldie's former husband keeps trying to win her back, and Vonnie brings her long lost son to meet the family of the father he never knew. All of these characters and more are intertwined through their potlucks which bring a sense of togetherness to the story. Together, the women of the Potluck Club talk over their individual problems and issues and teach us about patience, love, and forgiveness. Linda Evans Shepherd and Eva Marie Everson, softcover, 376 pages.

▼▲
Six women. More problems. New secrets. The Potluck Club is back with a yummy casserole of characters, hilarity, and adventure in Summit View, Colorado!

Club leader Evie continues to find newcomer Lisa Leann too tough to swallow, especially since the former Texan's new advice column causes rumors to rise faster than her famous instant-yeast cinnamon rolls. When one member stirs things up with a new 'do and a new outlook on life, the girls find themselves in a pickle as gossip takes over the group, a long-awaited romance doesn't go as planned, and the past comes back to haunt the club's youngest member.

Seasoned with loads of faith, forgiveness, and friendship, The Potluck Club--Trouble's Brewing gives readers the tasty next serving of friendship fiction that they've hungered for since the debut of this zestful, popular series.

▼▲
I'm the author/artist and I want to review Potluck Club-Trouble's Brewing, The: A Novel - eBook.
Back
Back