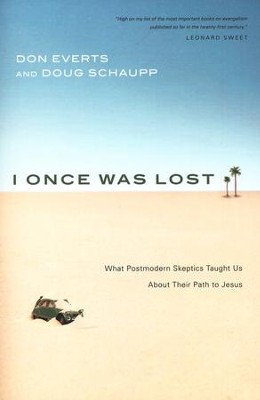 I Once Was Lost: What Postmodern Skeptics Taught Us About Their Path to Jesus

▼▲
How do people come to Jesus in today's "truth is relative" culture? Everts and Schaupp listened intently as 2,000 individuals described their journeys from postmodern doubt to Christian faith. Despite a diversity of circumstances, common themes were unmistakable. Discover factors that influence modern skeptics to consider Christ---and how to help your neighbors do likewise. 132 pages, softcover from InterVarsity.

How do people come to Jesus in today's postmodern culture? Not by a mechanical, linear process of cookie cutter conversions. Nor by a nebulous spiritual wandering that never culminates in decision and commitment. Over the last decade, Don Everts and Doug Schaupp have listened to the stories of two thousand postmodern people who have come to follow Jesus. While their stories are diverse and varied, certain common themes emerge. Postmodern evangelism is a mysterious and organic process that nevertheless goes through discernible phases, as people cross thresholds from distrust to trust, from complacency to curiosity and from meandering to seeking. Everts and Schaupp describe the factors that influence how people shift in their perspectives and become open to the Gospel. They provide practical tools to help people enter the kingdom, as well as guidelines for how new believers can live out their Christian faith.

Don Everts is a poet, preacher and writer who has spent a lot of time on college campuses playing hacky sack and eating cheap pizza. His books include Jesus with Dirty Feet, God in the Flesh, Getting Your Feet Dirty and the One Guy's Head series of postmodern apologetics.


Doug Schaupp is regional director for InterVarsity Christian Fellowship's campus ministries in Southern California. He is a frequent speaker on postmodern evangelism, racial issues and leadership development. He is the coauthor of Being White as well as a graduate of Fuller Theological Seminary and lives in Los Angeles.

"Everts, Schaupp . . . clearly identify the epistemological dissonance expressed by the skeptic and the effect this dissonance has on the psychology of conversion in the twenty-first century. Having listened to the testimonies of postmodern skeptics who have walked the path to faith, these authors offer us a coherent framework for both understanding the modern convert and accompanying him out of the world and into the kingdom."

"There is a lot of practical advice to be found here on how best to win postmodern people for Christ."

"[C]ommendable for its frank and realistic look at what entices or deters people on their way into the kingdom of God."

"This is a primer on how postmodernity affects evangelism. Doug and Don's observations are born out of experience, not theory. Their insights are accessible and applicable not only on the college campus but where you live and work."

-- Jim Henderson, author of Evangelism Without Additives and Jim and Casper Go to Church

"This book is a gem worth being found."

". . .immensely helpful without becoming formulaic. . .the book carefully travels the tightrope between the competing programmatic and relational paradigms of evangelism."

I would highly recommend the book as insightful, brief, hopeful and stimulating. College students will be loved better by people who read this book.

"Marked by a humility and maturity in desiring to make change in the way Christian become fishers of men, I Once Was Lost is a practical tool. With wise insights and healthy encouragement, Christians are inspired to take care in finding the answers and allow time, faith and prayer to be what leads others as well."

"This easy-flowing book tells many stories of students as they cross each threshold and gives practical tips on how to support people in each step."

"Particularly helpful is their discussion of how to provoke curiosity about the gospel. Although many Christians might be comfortable giving answers, they show that Jesus was a master of asking good questions."

"While the five thresholds give us bearings in a time of transition, Everts and Schaupp remind us that no model should be held too closely—as evangelism is finally determined by the individual before us."

"Many in college ministry will find this book fresh and challenging. Others will see in it principles and observations in which they already function comfortably. Either way, I Once Was Lost provides an apt reminder that what it means to creatively and respectfully love those whom God loves must change over time."

▼▲
I'm the author/artist and I want to review I Once Was Lost: What Postmodern Skeptics Taught Us About Their Path to Jesus.
Back
Back