Skip to main content
What If Love Is the Point?: Living for Jesus in a Self-Consumed World - eBook
By: Carlos Penavega, Alexa Penavega
Stock No: WW120239EB 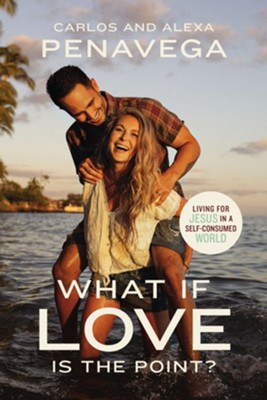 What If Love Is the Point?: Living for Jesus in a Self-Consumed World - eBook

Overflowing with both laughter and honest reflections, What If Love Is the Point? shares Carlos and Alexa PenaVegas’ incredible story—from the red carpet, Spy Kids movies, and Big Time Rush to Dancing with the Stars to marriage and now parenthood. The PenaVegas

The world saw Carlos Pena and Alexa Vega enjoying the success of their acting careers—Carlos on Nickelodeon’s Big Time Rush and Alexa in the Spy Kids movies. What fans didn’t see was Carlos struggling with the influences of Hollywood and reeling from broken relationships. Or Alexa hiding an eating disorder and recovering from a divorce. Or the question both Carlos and Alexa were asking in the midst of all that fame and fortune: What’s the point of it all anyway?

Then the two ended up attending the same Bible study. There they met people who seemed satisfied in life. They met new friends who seemed to be friends with God. They also met each other. Together, Carlos and Alexa discovered that God held the answers to their deepest questions—and even their unspoken longings. Now, happily married with three children, Carlos and Alexa want to tell others where they found true joy: in Jesus.

Carlos and Alexa believe that following Jesus was what they were made for—and they believe it’s what you were made for too. If you find yourself asking, Isn’t there more to life than this?, lean in to their remarkable story of tender faith, God’s persistent work, and learning why love is always the point of it all.

Carlos "Pena" PenaVega starred as Carlos Garcia on the Nickelodeon series Big Time Rush and then traveled with the show’s band, Big Time Rush. He is the voice of Bobby Santiago in the Nickelodeon cartoons The Loud House and The Casagrandes, was the host of the network’s game show Webheads, and has had guest-starring roles on several prime television shows. He and his wife, Alexa, appeared on the twenty-first season of Dancing with the Stars in fall 2015. In January 2014, Carlos and Alexa married in Puerto Vallarta, Mexico, combining their last names to form PenaVega. The couple shares a YouTube channel, LexLovesLos, and are the parents of two sons, Ocean and Kingston, and one baby girl, Rio.

Alexa "Vega" PenaVega is best known for her role as Carmen Cortez in the hit film series Spy Kids, and then reappeared as a grown-up Carmen in the fourth film, Spy Kids 4: All the Time in the World. She has performed on Broadway in Hairspray, played Ruby Gallagher on the ABC Family television sitcom Ruby & the Rockits, and has held roles in several other films. Most recently, she starred in a series of Hallmark made-for-television films. When she and Carlos Pena married in Puerto Vallarta, Mexico, the couple combined their last names to form PenaVega and are now the proud parents of two sons, Ocean and Kingston, and one baby girl, Rio.

▼▲
I'm the author/artist and I want to review What If Love Is the Point?: Living for Jesus in a Self-Consumed World - eBook.
Back
Back