Shipment delay - click here for more details
The New Dad's Playbook: Gearing Up for the Biggest Game of Your Life - eBook
By: Benjamin Watson 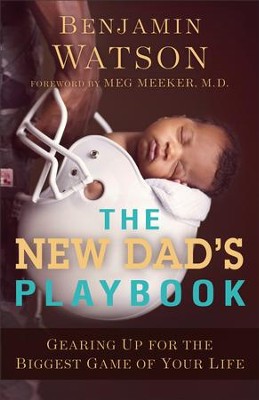 The New Dad's Playbook: Gearing Up for the Biggest Game of Your Life - eBook

Congratulations, Dad; you made the team! In this user-friendly guide from NFL champion Benjamin Watson, you'll learn what your wife is going through physically and emotionally, and how to "get in the game" even before your child is born - from the "training camp" of preparation to the "Super Bowl" of delivery day and beyond! Foreword by Dr. Meg Meeker.

▼▲
When it comes to the unknown territory of having a baby, moms-to-be have nearly unending resources to plan and execute a healthy pregnancy and navigate those first months and years as a parent with confidence. New dads? Not so much. They want to get in the game too, but, says Super Bowl champion Benjamin Watson, "I could find clearer direction for putting together a baby swing than for taking care of a newborn child."

The New Dad's Playbook is every man's game plan to being the best partner and the best father, from pre-season (preparing for fatherhood) to Super Bowl (birth) to post-season (after baby is home). It helps men understand what their wives are going through physically and emotionally during and after pregnancy, allowing them to support their most important teammate. It tells men what to expect when their baby is home--and what to do when the unexpected happens. This tell-it-like-it-is book will take men from just winging it to winning it.

▼▲
Benjamin Watson is a tight end for the Baltimore Ravens, an ESPN and NFL Network commentator, a leading spokesman for All Pro Dad and NFL Father & Kids Experience, and the founder of One More, a foundation that helps to spread the love and hope of Christ by meeting real needs, promoting education, and supporting local charities. A finalist for Walter Payton Man of the Year, Watson is deeply engaged in the community through his work with the NFL and its organizations and his own, and he is one of the league's most active members in both traditional and social media, with over 300,000 Facebook fans with whom he engages on a daily basis. He is the author of Under Our Skin and has appeared on Dr. Phil, The 700 Club, The Rachael Ray Show, CNN, Fox News, and many more. USA Today has said that Watson "illustrates the power of the platform that many players possess, but few are prone to use to address social issues. He is a shining example of how to put resources that come from his status as an NFL player to good use." He lives in Maryland with his wife, Kirsten, and their five kids.

▼▲
I'm the author/artist and I want to review The New Dad's Playbook: Gearing Up for the Biggest Game of Your Life - eBook.
Back
×
Back
×