Skip to main content
THE MEGA CHRISTMAS SALE: Save up to 85% off through 10/19 >
Pilgrim's Progress
By: Gary D. Schmidt
Illustrated By: Barry Moser
Stock No: WW853462 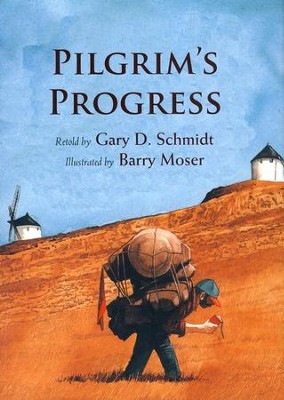 ▼▲
Newbery Honor award-wining author Gary Schmidt recaptures the classic tale of John Bunyan's Pilgrim's Progressin this contemporary retelling. Join Christian as he travels the City of Destruction to the Heavenly Palace. Barry Moser's stunning and dramatic watercolors bring the story to life in this lovely small-format edition is the perfect size for older readers. Recommended for ages 9 and up.

▼▲
National Book Award finalist and two-time Newbery Honor-winning author Gary D. Schmidt recaptures the classic tale of one man's spiritual journey in this contemporary retelling of John Bunyan's Pilgrim's Progress, masterfully illustrated with watercolors by artist Barry Moser.Here again is the tale of Christian's epic trek from the City of Destruction to the Heavenly Palaces - of the pitfalls that threaten to waylay him and the graces that strengthen him along the way. Matching Bunyan's flare for storytelling and vivid imagery, Gary Schmidt's new narrative also echoes the style of writers like J.R.R. Tolkien, Dante, Sir Thomas Browne, E.M. Forster, and Nathaniel Hawthorne.Even after three centuries, this odyssey of faith and human perseverance continues to inspire readers today - and now Schmidt's engaging retelling will delight and stir the imaginations of a new generation of pilgrims.

▼▲
Gary D. Schmidt is an English professor at Calvin College, Grand Rapids, Michigan, and a prolific author of children's literature and young adult fiction. His books Lizzie Bright and the Buckminster Boy and The Wednesday Wars each received a John Newbery Honor Award, and his Okay for Now has won a Children's Choice Book Award.
Barry Moser is the recipient of numerous illustration awards. He has designed and/or illustrated more than 300 titles, including The Aeneid of Virgil (University of California Press), Psalm 23 (Zonderkidz), and Moses (Harcourt). In addition to his work as a painter, designer, illustrator, and printer, Barry also lectures and exhibits internationally. He lives in North Hatfield, Massachusetts.

"This masterly rendition of Bunyan's 17th-century allegory issues a welcome invitation to visit this classic. A treasure sure to delight young and old."
The New York Times Book Review
"If an earthly power can restore Pilgrim's Progress to the children's library, this handsome version ought to do it."
Booklist
"This beautifully designed book has large, heavy pages, each divided into two columns by a single, scarlet line. Moser's watercolor paintings, mainly portraits of the characters dressed in clothing from many eras and places, thoughtfully interpret the text. A beautiful edition, recommended for any library with an audience for the classics."
School Library Journal
"The text is beautifully illustrated with Moser's colorful, realistic watercolors. . . An interesting, accessible version of an old classic that many YAs have heard about, but not all have read."

▼▲
I'm the author/artist and I want to review Pilgrim's Progress.
Back
Back