Skip to main content
A Piece of the Mountain: The Story of Blaise Pascal
By: Joyce McPherson
Stock No: WW514173 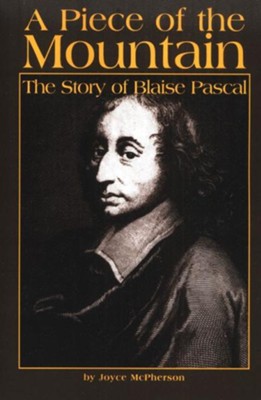 A Piece of the Mountain: The Story of Blaise Pascal

▼▲
Blaise Pascal was one of the most important scientists and mathematicians of the 1600s. Not only was he a brilliant scientist, but he converted to Christianity as an adult and became a devoted apologist for the Christian faith. Of special interest to homeschooling families, this book recounts the recognition of Blaise's remarkable talents by his father. The provisions the elder Pascal made for his son's education are among the earliest and most successful examples of home schooling. For Christians, the account of Pascal's conversion is particularly moving, as well as Pascal's immediate response of sharing the Gospel with his father, sisters, and the nobleman who was his financial patron. Written by a homeschooling mother. 124 pages, softcover. Ages 10-16.

▼▲
I'm the author/artist and I want to review A Piece of the Mountain: The Story of Blaise Pascal.
Back
Back