Skip to main content
White Picket Fences: Turning Toward Love in a World Divided by Privilege
By: Amy J. Becker
Stock No: WW469206 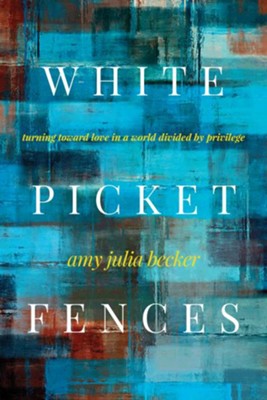 White Picket Fences: Turning Toward Love in a World Divided by Privilege

The notion that some might have it better than others, for no good reason, offends our sensibilities. Yet, until we talk about privilege, we'll never fully understand it or find our way forward.

Amy Julia Becker welcomes us into her life, from the charm of her privileged southern childhood to her adult experience in the northeast, and the denials she has faced as the mother of a child with special needs. She shows how a life behind a white picket fence can restrict even as it protects, and how it can prevent us from loving our neighbors well.

White Picket Fences invites us to respond to privilege with generosity, humility, and hope. It opens us to questions we are afraid to ask, so that we can walk further from fear and closer to love, in all its fragile and mysterious possibilities.

▼▲
Sometimes realizing your privilege starts with looking at your bookshelf.

Amy Julia Becker, author of White Picket Fences, began to consider the whiteness of her bookshelf, a bookshelf found acting “not as a door but as a mirror, a mirror that shows me my white skin, my stable and traditional family, my remote and safe neighborhood, and little of the expansive world outside [her] door” (19). As Becker quickly discovered in an attempt to read quality children’s literature with her three children, privilege often starts with noticing who’s not on your bookshelf – which for her meant realizing that there weren’t any books that featured children of different ethnic or racial backgrounds.

Nearly every character in the books she loved and filled her shelves with was white.

Connecting the dots from her bookshelf to her identity as a white, straight, middle-to-upper class, educated woman meant coming to grips with the reality of a privilege that had always been hers. But if waking up to the reality of privilege ultimately means learning to use and lay down this same privilege for good, a journey of noticing and deconstructing first must take place.

Like her previous books, A Good and Perfect Gift and Small Talk, Becker’s writing centers in story and in the art of telling good stories about herself and the people in her life. Perhaps most profoundly, the author is most able to identify privilege through her relationship with her oldest daughter, Penny, who was born with Down syndrome. Had it not been for Penny’s presence in her life, she might still feel dismissive or even bewildered by controversy (136), but being in intimate relationship with her daughter helped her make connections to other injustices bought by the price of privilege.

“As I have learned more about the history of people with intellectual disabilities,” she writes, “I have seen the parallels in their treatment to that of other oppressed groups” (137). I found myself nodding my head in agreement, because when the conversation becomes personal, we are changed. When we see how the heights and depths of how oppression affects those we intimately, actually know, then we are changed.

Although Becker writes to a Christian audience, the message is universal: if love lives at the core of our identity as human beings, then the power of love is big enough to change the way we interact with the world around us – just as it’s big enough for every single one of us to not only be given a seat at the table but to be offered the seat of honor and lifted up to a place of power.

And in that way, I hold onto a little bit of hope. Amy Julia Becker shows me that the tides of white supremacy and colonization might actually be turning, one conversation, one lament and one realization of privilege at a time.

▼▲
I'm the author/artist and I want to review White Picket Fences: Turning Toward Love in a World Divided by Privilege.
Back
Back