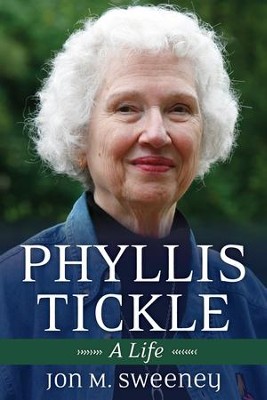 ▼▲
As the first religion editor at Publishers Weekly, a leading exponent of the emerging church, and a popularizer of fixed-hour prayer, Tickle profoundly shaped modern spirituality for six decades. Sweeney examines every aspect of her varied career---from influences that proved pivotal in her thinking to little-known literary achievements. 256 pages, hardcover.

▼▲
• Authorized text, initiated with Phyllis Tickle’s active involvement • Covers the full range of her life and work By the time of her death in 2015, Phyllis Tickle was one of the most beloved and respected figures in American religious life, and her writing offers a unique combination of the down-to-earth, deep spirituality, and scholarship. In this comprehensive new volume, Jon Sweeney, official biographer of Tickle’s literary estate, explores every aspect of her life, a more than 50-year legacy of poetry; plays; literary, spiritual, and historical/theological work; and advocacy. Himself an author and editor in the religion field, Sweeney examines Tickle’s personal and professional roots, from her family, long marriage, and life on The Farm in Lucy, Tennessee, to early academic career and move into book publishing, where her role as founding editor of the Religion Department at Publishers Weekly influenced the growth of spiritual writing and interfaith understanding during the 1990s. Sweeney also looks at pivotal relationships with John Shelby Spong, Marcus Borg, and Brian McLaren, as well as her great influence on the increasing number who adopted fixed-hour prayer, the Episcopal Church as a whole, and the Emerging Church, for which she served as historian, forecaster, and champion. A look at her early, passionate advocacy for the LGBT community, lecture circuit controversies, and projects left unfinished completes the picture.

▼▲
JON M. SWEENEY is an independent scholar and one of religion’s most respected writers. His recent books include The Pope Who Quit: A True Medieval Tale of Mystery, Death, and Salvation, published by Image/Random House and optioned by HBO; Inventing Hell, published in June 2014 by Jericho; and When Saint Francis Saved the Church, published by Ave Maria Press. Sweeney is editor in chief and publisher of Paraclete Press. He is married to Rabbi Michal Woll, has three kids. Jon and Phyllis were in active conversation about co-authoring a book at the time of her death.

“Sweeney, executive editor of Ave Maria Press and coauthor with Phyllis Tickle on The Age of the Spirit, paints an exemplary, intimate portrait of Tickle (1934–2015), a prolific writer who founded PW’s religion department in 1992. Sweeney begins by describing Tickle’s early life and hometown of Johnson City, Tenn. She fell in love with poetry as a child—the result of her father reading poems to her—and also expressed religious interest at an early age, and Sweeney quotes liberally from her writings composed during high school and college to track her spiritual evolution. Tickle spent most of her life in Tennessee, teaching in Memphis and moving to the “Farm in Lucy” outside of Millington in 1977, which became the setting for many of Tickle’s poems, stories, and essays. Though Sweeney sketches the outline of Tickle’s publishing career (which spanned over 40 books), he mostly concentrates on Tickle’s evolving sense of spirituality, which was reflected in her inspirational classics The Divine Hours and The Great Emergence, and how it was influenced by her near-death experience after taking an experimental miscarriage-prevention drug, the violent death of her fifth child only weeks after birth, and formative experiences with other religious writers such as Jack Spong. This loving biography impressively captures the grace Tickle demonstrated during a long, dedicated life.”

▼▲
I'm the author/artist and I want to review Phyllis Tickle: A Life.
Back
×
Back
×