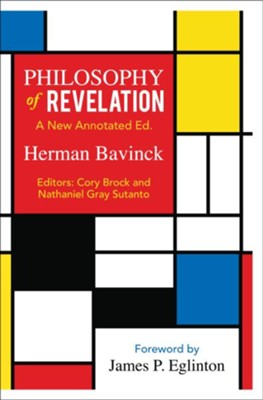 By: Herman Bavinck
Hendrickson Publishers / 2018 / Paperback
4 out of 5 stars for Philosophy of Revelation: A New Annotated Edition (1 Review) Write a Review
In Stock
Stock No: WW071365

Originally presented by Herman Bavinck (1854-1921) as the Stone Lectures at Princeton Theological Seminary, Philosophy of Revelation is the supreme entry into the mind of this Dutch Reformed theologian at the brink of the twentieth century. This groundbreaking framework of Bavinck's "organic motif" offers readers both a philosophy of revelation and a philosophy of revelation. Newly updated and annotated, this influential work brings readers into Bavinck's theology in a fresh, new way in the English language.

"Philosophy of Revelation is participation in an assumed God-ward reality insofar as it examines revelation in and through its relation to the various arenas of human life."
-From the introduction by Cory Brock and Nathaniel Gray Sutanto

Nathaniel Gray Sutanto (PhD, University of Edinburgh) is an elder and theologian at Covenant City Church (Jakarta, Indonesia) and an adjunct lecturer at Westminster Theological Seminary (Pennsylvania). His recent writings have appeared in Harvard Theological Review and Scottish Journal of Theology.

“While Bavinck’s lectures, Philosophy of Revelation, are a hundred years old, they are as timely as ever. Bavinck speaks to questions that continue to challenge us and revisits the core of Christian conviction: that God has revealed himself—that we have a Word from beyond the immanent frame we’ve constructed. And in this new edition, Brock and Sutanto highlight Bavinck’s influence on contemporary philosophers and his enduring relevance. Bavinck deserves a wider, ecumenical audience, and this volume is an excellent introduction.”

—James K. A. Smith, Professor of Philosophy, Calvin College; author of Desiring the Kingdom and How (Not) to Be Secular

“The fundamental question human beings face has not changed over the millennia: Do we find our meaning in something transcendent, or do we construct our own meaning from that which is immanent? Over recent centuries, this question has become more complicated, as one philosophical critique after another has claimed that the traditional Christian ideas of God and revelation are implausible or even incoherent. That question and these critiques lie at the heart of Herman Bavinck’s Philosophy of Revelation, in which the great Dutch theologian mounts a positive articulation and careful defense of the Christian idea of revelation in the face of its most pointed intellectual critics. With helpful introductory essays by James Eglinton and two rising stars in the world of Bavinck studies, this new edition of the Stone Lectures is a gift to the church. While the lectures were given over a century ago, they have a contemporary ring because the issues with which they wrestle remain with us. They offer the Christian today a model of intelligent, informed, and courteous engagement with opponents and a lasting contribution to orthodox theology.”

“The ongoing second coming of Herman Bavinck’s works, originally written a century ago, remains a cause for celebration. First there was Reformed Dogmatics, and now we have what is arguably Bavinck’s second-most important work on the centrality of revelation for a Christian worldview. Bavinck deserves to be ranked among the great theological B’s of the twentieth century—Barth, Brunner, and Bultmann—but this work is of more than historical significance. Christian theologians today continue to negotiate the narrow orthodox path through the broad avenues of modernity, and Bavinck’s firm grasp of the necessity of revelation for knowing not only God but also the world and ourselves makes him a reliable guide.”

▼▲
I'm the author/artist and I want to review Philosophy of Revelation: A New Annotated Edition.
Back
Back