Skip to main content
Get Christmas Ready Sale: Deals on over 1,150 titles thru 9/27.
Philosophical Foundations for a Christian Worldview / Revised - eBook
By: J.P. Moreland, William Lane Craig
Stock No: WW95136EB 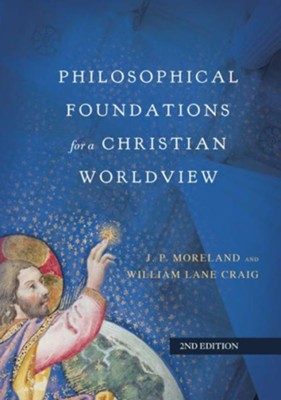 ▼▲
These are fundamental questions that any thinking person wants answers to. These are questions that philosophy addresses. And the answers we give to these kinds of questions serve as the foundation stones for constructing any kind of worldview. Now updated and expanded in this second edition, Philosophical Foundations for a Christian Worldview by J. P. Moreland and William Lane Craig offers a comprehensive introduction to philosophy from a Christian perspective. In their broad sweep they seek to introduce readers to the principal subdisciplines of philosophy, including epistemology, metaphysics, philosophy of science, ethics, and philosophy of religion. They do so with characteristic clarity and incisiveness. Arguments are clearly outlined, and rival theories are presented with fairness and accuracy. Philosophy, they contend, aids Christians in the tasks of apologetics, polemics, and systematic theology. It reflects our having been made in the image of God, helps us to extend biblical teaching into areas not expressly addressed in Scripture, facilitates the spiritual discipline of study, enhances the boldness and self-image of the Christian community, and is requisite to the essential task of integrating faith and learning. Here is a lively and thorough introduction to philosophy for all who want to know reality. This second edition now includes including enhanced arguments, updated bibliographies, and new chapters on atonement and the mind-body problem.

▼▲
J. P. Moreland (PhD, University of Southern California) is Distinguished Professor of Philosophy at Talbot School of Theology, Biola University, in La Mirada, California. He is the author, coauthor, or contributor to over ninety-five books, including Does God Exist?, Universals, The Blackwell Companion to Natural Theology, Consciousness and the Existence of God, Philosophical Foundations for a Christian Worldview, In Search of a Confident Faith, Love Your God With All Your Mind, The God Question, and Debating Christian Theism. In his distinguished career, Moreland has co-planted three churches, spoken and debated on over 175 college campuses around the country, and served with Campus Crusade for Christ for ten years. The founder and director of Eidos Christian Center, he also previously served as a bioethicist for PersonaCare Nursing Homes, Inc. headquartered in Baltimore, Maryland. Moreland?s ideas have been covered by both popular religious and non-religious outlets, including the New Scientist, Christianity Today, PBS's "Closer to Truth," and WORLD magazine. In 2016 Moreland was selected by The Best Schools as one of the "50 most influential living philosophers." William Lane Craig (PhD, University of Birmingham, England; DTheol, Ludwig-Maximilians-Universität München, Germany) is professor of philosophy at Talbot School of Theology and at Houston Baptist University. In 2016 he was named by The Best Schools as one of the 50 most influential living philosophers. Craig has authored or edited over forty books, including The Kalam Cosmological Argument; Divine Foreknowledge and Human Freedom; God, Time, and Eternity; and God and Abstract Objects, as well as over 150 articles in professional publications of philosophy and theology, including The Journal of Philosophy, New Testament Studies, Journal for the Study of the New Testament, American Philosophical Quarterly, Philosophical Studies, Philosophy, and British Journal for Philosophy of Science.

▼▲
Moreland and Craig present a comprehensive introduction to philosophy from a Christian point of view. Both theologically and philosophically engaging and stimulating. Moreover, the book is structured in such a way that prior knowledge in philosophy is not necessarily required to understand it. I highly recommend it.

▼▲
I'm the author/artist and I want to review Philosophical Foundations for a Christian Worldview / Revised - eBook.
Back
Back