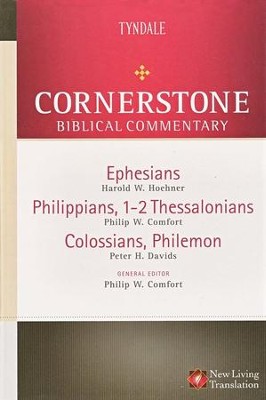 Save 60% - Slightly Imperfect
It's slightly imperfect, so you get it for an outstanding price! Minor flaws on this spectacular deal may include wrinkled pages, stray marks, missing dust jackets, dented corners or spines, dusty page edges, or minor cracks in CD cases.

▼▲
Featuring the New Living Translation of the Bible, volume 16 of The Cornerstone Biblical Commentary provides students, pastors, and laypeople with up-to-date, evangelical scholarship on the New Testament books of Ephesians, Philippians, 1-2 Thessalonians, Colossians, and Philemon. It's designed to equip pastors and Christian leaders with exegetical and theological knowledge to better understand and apply God's Word by presenting the message of each passage as well as an overview of other issues surrounding the text. 438 Pages. Hardcover from Tyndale.

Harold W. Hoehner, Ph.D. is Professor of New Testament at Dallas Theological Seminary and is well known for his work on biblical chronology in the first century.

Philip W. Comfort, D. Litt. et Phil., is senior editor of Bible reference at Tyndale House Publishers and adjunct professor of Religion at Coastal Carolina University. His works include Early Manuscripts & Modern Translations of the New Testament, The Text of the Earliest New Testament Greek Manuscripts, and Encountering the Manuscripts. He has authored two commentaries on John and three volumes of poetry. He serves as the coordinating New Testament editor for the New Living Translation, and he is the General Editor for the Cornerstone Biblical Commentary series.

Peter Davids, Ph.D. is a Professor of Biblical Theology at Stephen's University. He served as a missionary educator in Europe, training Christian leaders in the German-speaking world, and has written commentaries on James and 1 Peter. He is also co-editor (with Ralph Martin) of The Dictionary of the Later New Testament and Its Development. Slightly Imperfect.