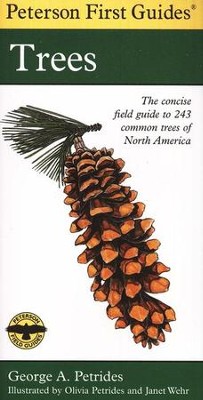 ▼▲
Gain an overview of the Trees you're most likely to encounter or study first--Pines, firs, oaks, willows, and other tree types are covered in plain language! Illustrations, diagrams and charts will help you in your quest to understand the natural world as you start your studies. The Peterson First Guides ® are condensed versions of the Peterson Field Guides ®. 128 pages, softcover. 3.75" x 7.25".

▼▲
Now there is a guidebook to trees--one of the most popular subjects in the Peterson Field Guide series--for the beginning naturalist. The 243 trees are grouped into six categories by leaf type and arrangement, making it easier for the beginner to identify unknown species. 200 color illustrations.

▼▲
George A. Petrides, ecologist and field naturalist, worked with the National Park Services and taught at Michigan State University at Lansing. Petrides has written for the Peterson Field Guide series and was the recipient of an award from the Federated Garden Clubs of Michigan for A Field Guide to Trees and Shrubs.

ROGER TORY PETERSON, one of the world’s greatest naturalists, received every major award for ornithology, natural science, and conservation as well as numerous honorary degrees, medals, and citations, including the Presidential Medal of Freedom. The Peterson Identification System has been called the greatest invention since binoculars.
Janet Wehr, RN, devoted much of her nursing career to hospice care. Wehr has served as a member of the Therapeutic Touch International Association, the American Holistic Nurses Association, and the Saret Charitable Fund of DuPage County, IL.

▼▲
I'm the author/artist and I want to review Peterson First Guide to Trees.
Back
Back