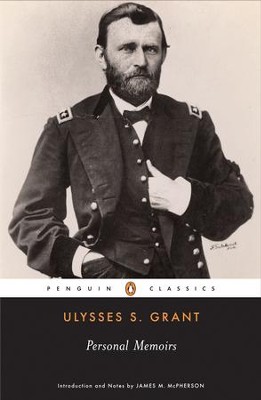 ▼▲
Faced with failing health and financial ruin, the Civil War's greatest general and former president wrote his personal memoirs to secure his family's future - and won himself a unique place in American letters.

Devoted almost entirely to his life as a soldier, Grant's Memoirs traces the trajectory of his extraordinary career - from West Point cadet to general-in-chief of all Union armies. For their directness and clarity, his writings on war are without rival in American literature, and his autobiography deserves a place among the very best in the genre.

▼▲
"One of the most unflinching studies of war in our literature."  --William McFeeley


Among the autobiographies of great military figures, Ulysses S. Grant's is certainly one of the finest, and it is arguably the most notable literary achievement of any American president: a lucid, compelling, and brutally honest chronicle of triumph and failure. From his frontier boyhood to his heroics in battle to the grinding poverty from which the Civil War ironically "rescued" him, these memoirs are a mesmerizing, deeply moving account of a brilliant man, told with great courage as he reflects on the fortunes that shaped his life and his character. Written under excruciating circumstances (as Grant was dying of throat cancer), encouraged and edited from its very inception by Mark Twain, it is a triumph of the art of autobiography.

The books in the Modern Library War series have been chosen by series editor Caleb Carr according to the significance of their subject matter, their contribution to the field of military history, and their literary merit.

▼▲
Ulysses S. Grant, commander in chief of the Union forces during the final years of the Civil War and eighteenth president of the United States, was born on April 27, 1822, and died on July 23, 1885, less than one week after completing work on this book.

Caleb Carr is the bestselling author of the novels The Alienist and The Angel of Darkness, as well as a critically acclaimed biography of an American mercenary, The Devil Soldier. He writes frequently on military history for The New York Times and MHQ: The Quarterly Journal of Military History, where he is a contributing editor.

"A unique expression of the national character....[Grant] has conveyed the suspense which was felt by himself and his army and by all who believed in the Union cause. The reader finds himself...on edge toknow how the Civil War is coming out."   --Edmund Wilson

▼▲
I'm the author/artist and I want to review Personal Memoirs - eBook.
Back
×
Back
×