The Persecution of Sarah Palin: How the Elite Media Tried to Bring Down a Rising Star - eBook
By: Magtthew Continetti 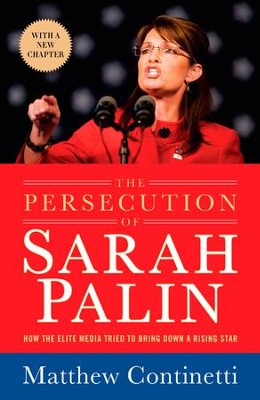 The Persecution of Sarah Palin: How the Elite Media Tried to Bring Down a Rising Star - eBook

As the second woman ever nominated as a candidate for vice president, Alaska governor Sarah Palin became an instant phenomenon. Americans were enthralled by a woman with charm, ambition, natural political talent, and a passion for conservative values.

But the fascination of ordinary people quickly drew an unprecedented attack from the media elite and liberal activists. Far beyond the normal bounds of tough questions and challenges, Palin's enemies decided that nothing was too personal to attack-including her marriage, her children, her faith, and her ward­robe. The media distorted Palin's positions and beliefs beyond recognition. And almost every word out of her mouth was spun as a "flub."

Weekly Standard writer Matthew Continetti reveals the true story of the 2008 Republican vice presidential nominee and her persecution by the elites who tried to hide their bias with solemn declarations of objectivity. Continetti offers fresh examples of malicious spin and deceit and shows how liberal snobbery has become a driving force in American politics.

Palin's ordeal has become a rallying cry for the GOP in the Obama era. This perceptive book is a must-read for conservatives who want to understand what really happened-and how to avoid a repeat.

▼▲
Matthew Continetti is a staff writer at the Weekly Standard. His articles and reviews have also appeared in the New York Times, the Washington Post, the Los Angeles Times, and Doublethink. He lives in Washington, DC.

▼▲
I'm the author/artist and I want to review The Persecution of Sarah Palin: How the Elite Media Tried to Bring Down a Rising Star - eBook.
Back
×
Back
×