Skip to main content
Get Christmas Ready Sale: Deals on over 1,150 titles thru 9/27.
The Law of Perfect Freedom: Relating to God and Others through the Ten Commandments
By: Michael Horton
Stock No: WW46372X 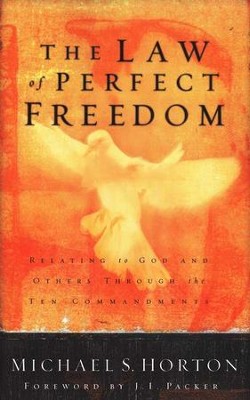 The Law of Perfect Freedom: Relating to God and Others through the Ten Commandments

▼▲
The Ten Commandments are not Moses' bright ideas or simply God's suggestions; they are God's categorical requirements. In this book, Michael Horton weaves theological truth with practical application to help believers live out the Ten Commandments. Understanding how to live out these commandments brings vitality and victory to our walk with God.

▼▲
The Ten Commandments are not Moses' bright ideas or simply God's suggestions; they are God's categorical requirements. In The Law of Perfect Freedom, Michael Horton weaves theological truth with practical application to help believers live out the Ten Commandments. Understanding how to live out these commandments brings vitality and victory to our walk with God.

▼▲
MICHAEL S. HORTON (Biola University; Wycliffe Hall, Oxford; University of Coventry) is Professor of Theology and Apologetics at Westminster Theological Seminary in California. In addition to his work at the Seminary, he is the president of White Horse Media, for which he co-hosts the White Horse Inn, a nationally syndicated, weekly radio talk-show. He is also the editor-in-chief of Modern Reformation magazine. He served in pastoral ministry for over ten years. He is author of over a dozen books including Law of Perfect Freedom, Agony of Deceit, and Christless Christianity. He lives in Escondido, California, with his wife, Lisa, and four children.

▼▲
Someones been kicking around our sacred cows lately. In his book, The Law of Perfect Freedom: Relating To God And Others Through The Ten Commandments, Michael S. Horton takes aim and lands a bulls-eye punch as he challenges our understanding of the ten laws that we only thought we knew: The Ten Commandments. Calling for "a massive re-education in the basics," his book is a conscious effort to see these commandments not merely as stones to throw at a secular society, but as a witness to our unfaithful record, or the clear evidence, as he puts it, that something is rotten in our own backyard.
Michael Horton is not a newcomer to Christian apologetics. Author of more than a dozen books, he is also the professor of Theology and Apologetics at Westminster Seminary in California, president of the Alliance of Confessing Evangelicals, co-host of a nationally syndicated radio talk-show and editor-in-chief of Modern Reformation magazine. In this comprehensive guide to the Ten Commandments, Horton speaks primarily to Christians as he engages us in clear and direct teachings about the background, meaning, and significance of each of the Ten Commandments. Even though we have these clear teachings from God Himself, Horton maintains, we have become a nation of biblical illiterates, a nation who has replaced the Christ of Christianity with a message about inner peace or being born again or having Jesus in my heart and who may not have enough knowledge of and concern for Christ Himself to constitute a meaningful relationship.
Although the subtitle of the book, Relating to God and Others Through the Ten Commandments, may give the appearance that this is a how-to book -- how to obey the Ten Commandments in ten easy steps, as though we will be acceptable to God based on our performance -- it is clearly centered on what God has done for us in Jesus Christ: we are His people based on what He has done for us, including fulfilling the law. Because of our redemption in Jesus Christ, Horton explains, we can serve Him in perfect freedom without fear. Thus, the book was named The Law of Perfect Freedom.
One by one, Horton shines the light of Gods truth on our hearts by examining each of the Ten Commandments, and helps readers understand their far-reaching implications. He pulls no punches as he takes a few stabs at the personal and social piety of evangelicals in America today in contrast to Gods idea of holiness, His standard for right relationships. His well-documented insights are on target and hit at the very heart of our unfaithfulness to God and His law. A careful reading of The Law of Perfect Freedom helped me become more aware of my hidden sinfulness and willful ignorance of Gods commands, as I toppled from the security of my own sacred cow, and landed squarely at the foot of the cross. -- Susan Hammond, Christian Book Previews.com

▼▲
I'm the author/artist and I want to review The Law of Perfect Freedom: Relating to God and Others through the Ten Commandments.
Back
Back