EARLY CHRISTMAS SALE: Shop over 900 items up to 85% off through 9/29 >
A Free People's Suicide: Sustainable Freedom and the American Future - eBook
By: Os Guinness 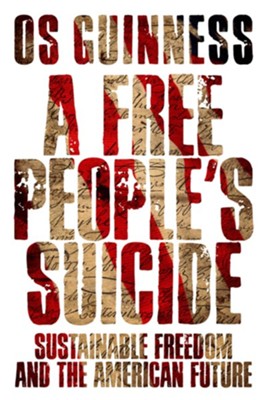 ▼▲
"If destruction be our lot, we must ourselves be its author and finisher. As a nation of freemen, we must live through all time, or die by suicide." Abraham Lincoln Nothing is more daring in the American experiment than the founders' belief that the American republic could remain free forever. But how was this to be done, and are Americans doing it today? It is not enough for freedom to be won. It must also be sustained. Cultural observer Os Guinness argues that the American experiment in freedom is at risk. Summoning historical evidence on how democracies evolve, Guinness shows that contemporary views of freedom--most typically, a negative freedom from constraint-- are unsustainable because they undermine the conditions necessary for freedom to thrive. He calls us to reconsider the audacity of sustainable freedom and what it would take to restore it. "In the end," Guinness writes, "the ultimate threat to the American republic will be Americans. The problem is not wolves at the door but termites in the floor." The future of the republic depends on whether Americans will rise to the challenge of living up to America's unfulfilled potential for freedom, both for itself and for the world.

▼▲
Os Guinness (DPhil, Oxford) is the author or editor of more than thirty books, including and A frequent speaker and prominent social critic, he has addressed audiences worldwide from the British House of Commons to the U.S. Congress to the St. Petersburg Parliament. He founded the Trinity Forum and served as senior fellow there for fifteen years. Born in China to missionary parents, he is the great-great-great-grandson of Arthur Guinness, the Dublin brewer. After witnessing the climax of the Chinese revolution in 1949, he was expelled with many other foreigners in 1951 and returned to England where he was educated and served as a freelance reporter with the BBC. Since coming to the U.S. in 1984, he has been a guest scholar at the Woodrow Wilson Center for International Studies and a visiting fellow at the Brookings Institution. He was the lead drafter of the Williamsburg Charter, celebrating the First Amendment, and has also been senior fellow at the EastWest Institute in New York, where he drafted the Charter for Religious Freedom. He also co-authored the public school curriculum Guinness has had a lifelong passion to make sense of our extraordinary modern world and to stand between the worlds of scholarship and ordinary life, helping each to understand the other - particularly when advanced modern life touches on the profound issues of faith. He lives with his wife, Jenny, in McLean, Virginia, near Washington, D.C.

▼▲
" A Free People's Suicide challenges each and every citizen concerned about America's diminishing role as a beacon of liberty not only to comprehend the urgency, but also to participate comprehensively in freedom's preservation."
"Dr. Guinness' book is rich in its explorations of Lincoln's words and their import for us today. As an expatriate friend of America, Guinness, like de Tocqueville, has a rare gift for helping us see our better selves. He casts a discerning eye at our modern institutions, and habits of the heart—as reflected in the broader culture. He freely concedes that there are worrying signs on the horizon, but then, having thoughtfully set out the challenges we face in our historical moment, he brings us back to the best things the founders gave us. On the whole, it's a fascinating perspective from a British citizen."

▼▲
I'm the author/artist and I want to review A Free People's Suicide: Sustainable Freedom and the American Future - eBook.
Back
×
Back
×