Skip to main content
SPRING CYBER EVENT STARTS NOW: And it's a really BIG deal! Up to 88% off through 5/24>
Pensees
By: Blaise Pascal
Stock No: WW46451 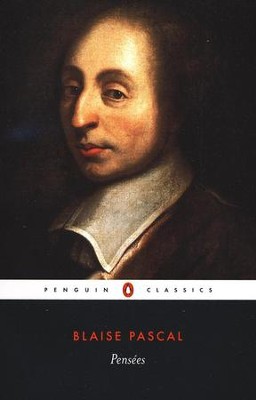 ▼▲
Updated edition of the famous Krailsheimer translation, the first to follow the order of notes as Pascal left them. This unfinished apology for Christianity was meant to confound the followers of Descartes by emphasizing the inadequacy of reason.

▼▲
Blaise Pascal, the precociously brilliant contemporary of Descartes, was a gifted mathematician and physicist, but it is his unfinished apologia for the Christian religion upon which his reputation now rests. The Pense&eacute;s is a collection of philosohical fragments, notes and essays in which Pascal explores the contradictions of human nature in pscyhological, social, metaphysical and - above all - theological terms. Mankind emerges from Pascal's analysis as a wretched and desolate creature within an impersonal universe, but who can be transformed through faith in God's grace.

▼▲
Blaise Pascal was born in Clermont in 1623, the son of a government official. During his short life he left his mark on mathematics, physics, religious controversy and literature. A convert to Jansenism, he engaged with gusto in a controversy with the Jesuits, which gave rise to his Lettres Provincialeson which, with the Pens&eacute;es, his literary fame chiefly rests. A remarkable stylist, he is regarded by many as the greatest of French prose artists. He died, after a long illness, in 1662.

▼▲
I'm the author/artist and I want to review Pensees.
Back
Back